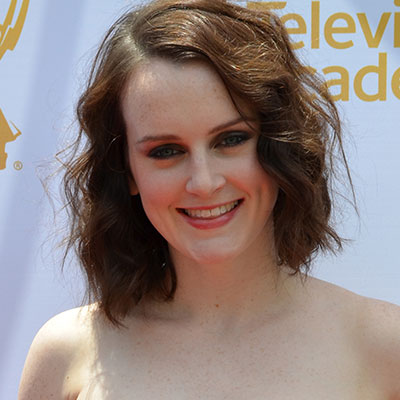 This beautiful lady might be dating secretly because she is already 33 and she might have fallen in love with someone. But till date, she hasn’t shared any information regarding her affairs, dating, and rumors.

Born on 1st January 1985, Sophie McShera is born to Irish parents in the city of Bradford, West Yorkshire, England. Both her parents were a teacher, but later, her father changed his profession and became a financial advisor.

Later, her family moved to Eccleshill, West Yorkshire where she attends St. Joseph College. After completing the course, she joined Footsteps Theater School. She also got several opportunities to act on the stages performance in her college days.

When she was 12, she got a chance to appear in a production, The Goodbye Girl at The Palladium, London. Further, she earned a degree in drama course from the Brunel University.

She stands 5 feet 3 inch tall with the weight of 123 Ibs. This Capricorn star has got hazel blue eye color with short brown curly hair which increased the inner beauty of this lovely lady. She holds the citizenship of England and practices Christianity. She belongs to Irish ethnicity.

When Sophie McShera was pursuing her higher education at the university, she got an opportunity to get enrolled in the drama plays and operas. In the year 2007, she was cast in the British Soap opera Emmerdale of Kelvin Laffan and musical soap opera, Doctors.

The following year, she also starred in science fiction television series, Survivor where she shared the screen with stars like Julie Graham, Max Beesley, Freema Agyeman, and so on.

After receiving a huge recognition from numerous drama and soap opera, Sophie made her appearance in the British television drama series, Waterloo Road, created by Ann McManus and Maureen Chadwick that broadcast on BBC One and BBC Three. She is seen playing the role of Ros McClain, an A-level student in a comprehensive school of the same name.

One of her successful hit TV series turned to be the historical period drama TV series, Downton Abbey created by Julian Fellowes, in 2010. The TV series aired on ITV in the UK and PBS in the United States. This TV series helped her to earn name and fame in the TV Cinema world.

Next, she starred in The Job Lot, Highway to Dhampus, Bradford: A City of Dreams and finally, she made a breakthrough performance through American romantic fantasy movie, Cinderella, in 2015. It is a directorial movie of Kenneth Branagh that starred Cate Blanchett, Lily James, Richard Madden, Stellan Sakargars and so on.

It was one of the breakthrough movie of her which earned the box office collection of $543 million all over the world. It also received an Academy Award nomination for best costume design at the 88th Academy Awards.

This 32-years-old actress, Sophie McShera is seen flaring in a romantic love relationship with Matt Milne and Thomas Howes in the TV series, but in real life, this beautiful lady is currently single and not dating anyone.

She is struggling hard to grab the lead role in her upcoming projects: as she has yet not played any lead role either in the TV drama series or the movie industry.

After working on successful hit movies like Cinderella, Sophie McShera must have earned quite a decent amount of money from the film. She not only received a bright career in her near future in the related field.

Allocating information from several sources as of 2018, it is found out that Sophie McShera’s current estimated net worth is around $1 million from her acting profession. She also makes money from different endorsing brands including Bazaar. Through Sophie’s busy schedule, she enjoys shopping and loves wearing expensive dresses and travel to different places.