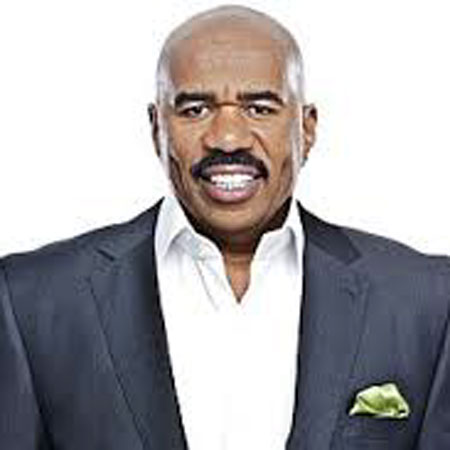 As of 2019, Steve Harvey has a net worth of over $140 million. Further, he has been married thrice and has four children from his first two marriage.

Steve Harvey earns the good sum of money in his career. His sources of income include Comedy, Acting, Writing, TV series, books and dating site. He had gifted his wife white Rolls-Royce Phantom Drophead Coupe on her 50th birthday which worth $433,000. Once he also owned a Plano Mansion which was worth $3.5 million.

Steve is a sucker for designer shoes collection and cars. He also owes five-story Atlanta mansion which features lush gold-trimmed velvet furniture, floor-to-ceiling artwork, full bar, indoor golf course, walk-in humidor and movie theater which worth around $4 million. It is estimated that his current net worth is around $140 million.

Steve married thrice and has seven children altogether. Firstly, he got married his first spouse, Marcia Harvey in 1980 and welcomed twin daughters, Brandi and Karli as well as a son, Broderick Harvey Jr.

Secondly, he got married to Mary Shackelford in 1996 and welcomed another son, Wynton. After nine years of marital relationship, they ended their relationship in divorce in 2005.

Marjorie has three children from her previous marriage and Steve raises them as his own children. The couple is living together and enjoying their marital relationship. With the raising of fame, Steve Harvey been through several controversies.

In 2015, Steve hosted the Miss Universe 2015 in Las Vegas. During the final results announcement, he mistakenly pronounced first runner-up, Ariadna Gutierrez, as the winner. After she was crowned, he announced that he had read the final results incorrectly and also apologized her personally.

Steve Harvey apologized to Both Miss Universe and Miss Colombia

Moreover, in 2011, during his radio show with Cornel West and Tavis Smiley, they criticize former President Barack Obama. Later, he apologized Obama for using the slur. His comments about atheists, Asian men, and Joke about Flint water crisis lead him to controversies.

Steve was born on 17th January 1957 in Welch, West Virginia. He was born to father, Jesse Harvey, coal miner, and mother, Eloise Vera and grew up along with his siblings. His family moved to Cleveland, Ohio on 112th Street East which changed into Steve Harvey Way in 2015.

Steve attended Glenville High School in 1974. After completing graduation, he went to Kent State University and West Virginia University where he was an active member of Omega Psi Phi fraternity. Before starting a professional career, he has been a boxer, an autoworker, an insurance salesman, carpet cleaner and a mailman.

Steve used to performed stand-up comedy at the Hilarities Comedy Club in Cleveland, Ohio in 1985 and was a finalist in the Second Annual Jonnie Walker National Comedy Search performing. His success as a stand-up comedian landed him in a starred role on the ABC show Me and the Boys in 1994.

Harvey is also the host of a weekday morning radio program, The Steve Harvey Morning Show from 2000 to 2005. He also hosted program Family Feud, Daytime talk shows, Miss Universe in 2015, 2016, and 2017 as well as several other shows.

On the other side, Steve Harvey also appeared and featured in several movies and tv series. His notable roles in tv and movies include Think Like a Man, Racing Stripes, Love Don’t Cost a Thing, Who Wants to Be a Millionaire, The Steve Harvey Show, The Parkers, Praise the Lord and much more.