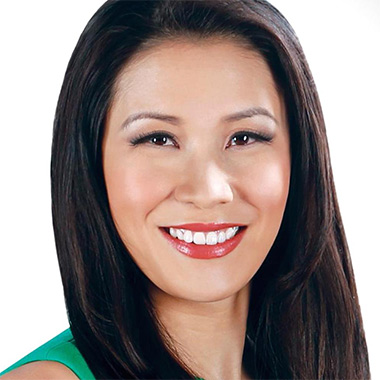 Susan Li is a Canada-based journalist working for CNBC. She is known as the co-host of CNBC Global program Worldwide Exchange from London and across Asia and Europe from September to December 2015.

Susan Li Journalist Susan Li was born in China and grew up in Toronto, Canada. Susan Li exact date of birth and age are not revealed in the media publicly but some source said that she was born on May 1, 1985.

From the University of Toronto, Susan Li has obtained a degree in economics. Li is fluent in English and also can speak Cantonese and Mandarin.

Susan Li started her career from Canadian Broadcasting Corporation, where she has performed various roles including associate producer and freelance reporter for both radio and television. As a host, Susan Li has joined Bloomberg Television in 2006. She has hosted evening newscast in the Asian Pacific, Asian Business Tonight. In 2010 she has seen hosting Edge and Morning Call on Bloomberg. She has seen doing coverage of 2008 Summer Olympic in Beijing, the Shanghai World Expo, the Chinese stock market bubble and the Global Financial Crisis. In 2012 she is seen hosting “First Up”, for which she was highly appreciated and for that show she has won the Best News Program Award at the 17th Asian Television Awards. Susan Li was also the co-host of Asian Edge, which includes interviews and news coverage.Susan-li During her professional career, she has interviewed a range of business and government leaders.

While working for CNBC, Susan Li has interviewed many world famous artists such as Robert de Niro, Nobu Matsuhisa, Jet Li and much more. In May 2014, Susan Li had got a chance to interviewed Indian Finance Minister P Chidambaram and Bank of Japan Governor Haruhiko Kuroda in Kazakhstan. Susan Li has seen interviewing famous persons and business leaders and has reported on top news stories from across the globe. In 2014, Susan Li has joined CNBC Asia as co-anchor of Asia Squawk Box. She co-anchored ASB with Martin Soong. Li and Bernard Lo are now co-anchoring Asia Squawk Box, which is now based in Hong Kong.

Susan Li official twitter account is opened by the name @SusanLiTV. She has been followed by more than 11.4K+ followers and has tweets more than 2500+ times, which shows her presence in social media. Various sources said that she is already married but her husband name and profession is not disclosed in the media. Susan Li height is about 1.63m. In 2008 at the Asian Television Awards she was nominated as Best News Anchor. As of 2016, Susan Li net worth is estimated to be $3 million dollars.