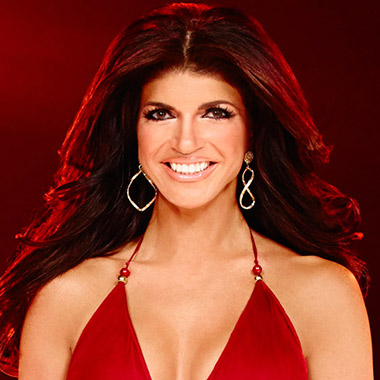 Teresa Giudice is an American television personality, author, and entrepreneur. She is widely known for being the cast member of popular Bravo’s show ‘The Real Housewives of New Jersey’. Besides her work on the show, Giudice has written a variety of New York Times bestseller cookbooks and was featured on Donald Trump’s The Celebrity Apprentice 5 in 2012.  She was sentenced to federal prison for fraud in 2015.

Teresa was born on May 18, 1972, in Paterson, New Jersey, United States. She was born to Italian immigrants. Her birth name is Teresa Gorga and follows Catholic religion. She has a brother named Joe. She met her husband Joe Joseph Guiseppe Giudice in Paterson, New Jersey. She can fluently speak and write Italian as she grew up speaking Italian. She also can speak English. She as a child studied at Catholic school. She then attended Berkeley College and studied fashion marketing there.

After her college, she worked as an associate buyer for Macy. She is also a committee member of a charity, Project Ladybug. It is founded by RHONJ co-star Dina Manzo. She also has co-authored three successful cookbooks. Her cookbooks also include recipes which are handed by her mother. On May 4, 2014, her first Skinny Italian was published. On May 3, 2011, her second Fabulicious was published.

On May 8, 2012, her third Fabulicious!: Fast and Fit was released. Her each book was counted in the New York Times Best Seller List. She also has created a line of bellini cocktails, Fabellini. Along with Jerel Sabella, she created a hair care named after her daughter Milania. She joined The celebrity Apprentice 5 in 2012. The reality competition ultimately raised $70000 for her selected charity The NephCure Foundation. In episode 12 she was fired after placing fifth.

She got married to Joe Giudice. Joe owns a restaurant in New Jersey. The couple together is blessed with four daughters named Gia, Milania, Gabriella and Audriana. Teresa Giudice’s net worth is around $11 million dollars as of 2016.

She filed for bankruptcy in October 2009. The couple withdrew their petition for bankruptcy after an auction of furniture from their Towaco, NJ home was scheduled for August 22, 2010. The couple was charged with wire fraud, mail fraud, and bank fraud on July 29, 2013. They were charged because of making false statements on loan applications. The two were charged with financial fraud on August 14, 2013. On January 13, 2010, Joe’s driver’s license was suspended following a DUI arrest. His license was suspended for 12 months. She was sentenced to 15 months in federal prison on October 2, 2014. Followed by potential deportation to Italy, Joe received a 41-month sentence. The couple together must pay $414000 in restitution. They were allowed to sentenced separately because one of them have to stay with their children. On January 5, 2015, she began her first sentence. She surrendered herself at 3 a.m. instead of 10 a.m.