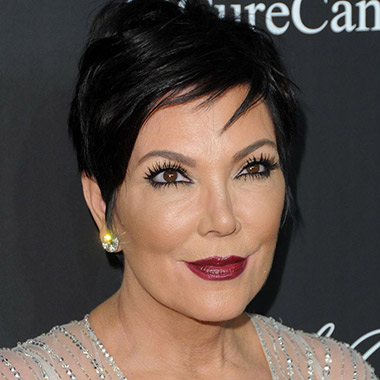 Kris Jenner is a beautiful American television personality. She is mainly known as she came on the reality TV show “Keeping up with the Kardashians”.

Kris was born on November 5th, 1955 in San Diego, California, United States. Her birth name is Kristen Mary Houghton. She was born to Mary Jo Shannon and Robert Houghton, an engineer. Her parents divorced when she was seven years old. She has a younger sister named Karen. She with her sister was raised by her mother. Her mother  remarried to  businessman  Harry Shannon after few years. Harry’s business partner ran off with all the company’s money, three months after moving to Oxnard, California. After the incident, they moved to San Diego. Kris Jenner studied at Clairemont High School. In 1976 she worked as a flight attendant.

She started her own production company in Los Angeles named as Jenner Communications. She started managing her daughter Kim’s career since the start of “Keeping Up With The Kardashians”. She also helps her daughters and son in managing their business. On November 1, 2011, her autobiography “Kris Jenner … and All Things Kardashian” was released. She also has hosted a pop culture show “Kris”. On July 15, 2013, the series began its six-week trial summer run on Fox-owned stations. Her son-in-law Kanye West revealed his daughter North West picture publically on Kris Jenner’s daytime talk show.

On July 8, 1978, she first got married to lawyer Robert Kardashian. The couple together has four children named Kourtney, Kim, Khloe and a son Rob. Unfortunately, in March 1991 they got divorced. Although they were divorced they still remained to be close friends. Robert died in 2003 because of esophageal cancer. She had an affair with animator and former soccer player Todd Waterman which she confessed in 2012. She used to refer Waterman as “Ryan” in her autobiography. While Kris was having a tennis lesson they had an encounter on “Keeping up with the Kardashians”.

After her one month of her divorce, she got married to her second husband Bruce Jenner in April 1991 who is a former Olympian. The couple together has two daughters named Kendall and Kylie. She has explained in her autobiography that the name of her daughter Kendall Nicole is named after Nicole Brown Simpson. Kris also has four stepchildren named Burt, Cassandra, Brandon, and Brody. They are from the previous marriage of Bruce. In October 2013 she announced their separation. On September 22, 2014, she filed for divorce, citing irreconcilable differences. On March 23, 2015, the divorce became final. After their divorce, they kept an amicable relationship with each other. She has got four grandchildren.

For enhancing her breasts she underwent plastic surgery twice. She also has done her nose job. Before her daughter, Kim’s wedding she had her plastic surgery in June 2011. As of 2016, Kris Jenner’s net worth is around $80 million.