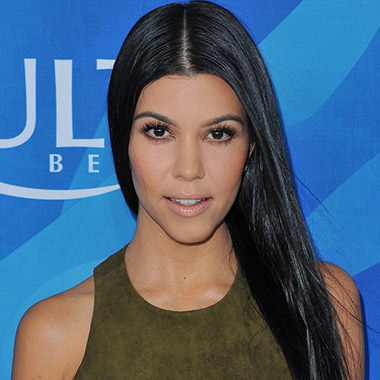 Kortney Kardashian is a gorgeous American television personality as well as a model. She with her family were in the reality television series Keeping Up with the Kardashians. She is involved in the retail and fashion industries with her sisters Kim and Khloe. Together they have launched several clothing collections as well as fragrances. In 2010 they have also released the book Kardashian Konfidential.

Kortney was born on April 18, 1979, in Los Angeles, California, United States. Her birth name is Kourtney Mary Kardashian. She was born to her parents Robert and Kris. She also has two younger sisters named Khloe and Kim. Her younger brother name is Rob. In 1991 her parents got divorced. Kris remarried to Bruce Jenner in 1991. Her stepbrother’s name are Burton, Brandon, and Brody. Her stepsister name is Casey and her half-sisters are Kylie and Kendall.

She studied at a Roman Catholic all-girls school, Marymount High School located in Los Angeles. She then moved to Dallas, Texas and studied at Sothern Methodist University for two years. She then resides in Tucson, Arizona. She attended the University of Arizona and graduated from there with a bachelor’s degree in Theatre Arts and she also did minor in Spanish. While she was studying she had her classmates, Luke Walton and Nicole Richie.

Kourtney became famous as she came to reality-television series Filthy Rich: Cattle Drive on which she earned money for charity. Her sister Kim and Kim’s former boyfriend Ray J made a sex tape in 2003 which was released in February 2007 which contributed to her rise to prominence. Later that year, her mother Kris, stepfather Bruce, siblings Khloe, Kim and Rob, half-sisters Kylie and Kendall in the reality television series Keeping Up with the Kardashians. The series became successful for E! Network. She along with her mother opened children’s clothing boutiques called Smooch which is situated in the New York City and Los Angeles area. The boutique carries the brand Crib Rock Couture. She also co-owns and operates a clothing boutique called as D-A-S-H with her sisters Kim and Khloe Kardashian. The boutique is situated in Miami, Los Angeles, and New York City. With her sisters, she released a clothing line for Bebe in the spring of 2010. She announced that she is working on another clothing line called K-Dash with her sisters. She also created a sunless tanner called Kardashian Glamor Tan with her sisters in 2010. With her sisters, she wrote the book Kardashian Konfidential which was released in November 2010.

On March 28, 2011, she appeared on the One Life to Live making her debut in acting. She appeared as attorney Kassandra Kavanagh. She described her appearance as the realization of a “lifelong dream” as she had grown up watching the soap opera. Unfortunately, her performance did not meet with positive reviews. With her younger sister Kim, they created a reality television series Kourtney and Kim take Miami. In January 2013 it became airing. The television series features their mother Kris Jenner as well as her sister Khloe Kardashian. With her sisters, she represents the SKINCARE line PerfectSkin. It was developed by Dr. Ron DiSalvo for Perfect Science Labs.

In 2006 she dated Scott Disick. They first met each other at their friend’s Joe Francis house party in Mexico. The couple went through with on and off the relationship. On December 14, 2009, she gave birth to her son named Mason dash Disick. Her son’s birth was filmed and aired in Keeping Up with the Kardashians. The couple temporarily moved to Miami with her son and sister Kim. She gave birth to their daughter named Penelope Scotland Disick on July 8, 2012. It was announced that she was expecting their third child together. On December 14, 2014, she gave birth to their third child son named Reign Aston Disick. As of 2016, Kardashian’s net worth is estimated to be $20.4 million.