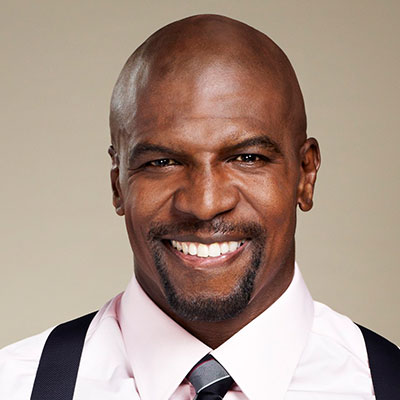 Terry Crews is an American actor, an artist as well as former football player. He is better known for his roles as Julius Rock on the sitcom Everybody Hates Chris and as Nick Kingston-Persons in the TBS sitcom Are We There Yet?.

Terry Crews was born on 30th July 1968, in Flint, Michigan, the United States to Patricia and Terry Crews, Sr. His father was an abusive alcoholic so that, Crews was raised up by his mother in a strict Christian household.

Crews earned high school diploma from Flint Southwestern and then joined Interlochen Center for the Arts after receiving a Chrysler-sponsored art scholarship. Likewise, he further received an Art Excellence scholarship and a full-ride athletic scholarship for football at Western Michigan University.

Previously, Terry Crews played football at NFL. He was drafted by Los Angeles Rams in the 11th round of the 1991 NFL Draft. Likewise, he further played for the San Diego Chargers, the Washington Redskins, and the Philadelphia Eagles. Crews retired from NFL in 1997.

In 1996, Crews co-wrote and co-produced a movie Young Boys Incorporated. After his retirement from NFL, Crews moved to Los Angeles to pursue his career in acting. Crews made his acting debut through the syndicated game show Battle Dome. Likewise, he further appeared in commercials, films, and music videos.

His breakthrough role came through the movie Friday After Next. After that, he starred in several other popular movies including White Chicks, The Longest Yard etc. Crews got a wide public recognization after he portrayed the role of Julius Rock in Everybody Hates Chris.

Likewise, his another notable role is as Nick Kingston-Persons in the TBS sitcom Are We There Yet? Well, Crews will be starring in the movie Dead Pool 2 which will be released in 2018.

One of the renowned actor Terry Crews is married to his beloved girlfriend Rebecca King-Crews. The duo tied the knot back in 1990. Before their marriage, the couple dated for a couple of years.

The couple is blessed with four daughters  Azriel Crews, Wynfrey Crews, Naomi Burton-Crews, Tera Crews and a son Isaiah Crews. Since their marriage, the couple is still together. Both of them often shares adorable pictures of their family on Instagram and further makes public appearances together.

Till date, the couple hasn’t faced any rumors of divorce and other extra-marital affairs. Besides this, Crews hasn’t been in any relationships before.

Since long, Terry Crews is still active in the field of acting and till date, he has starred in numerous movies and television series. From his acting career, Crews earns a good amount of money. Furthermore, he must have earned a good sum of money from his NFL career.

As of now, Crews has an estimated net worth of $20 million. Likewise, his wife Rebecca’s net worth is $20 million. The couple currently resides in Pasadena, California (CA), the US with their children.

Moreover, he is also a co-founder of the design company Amen&Amen from which he further adds money. Crews further own a Pitbull dog worth $300-$1500.