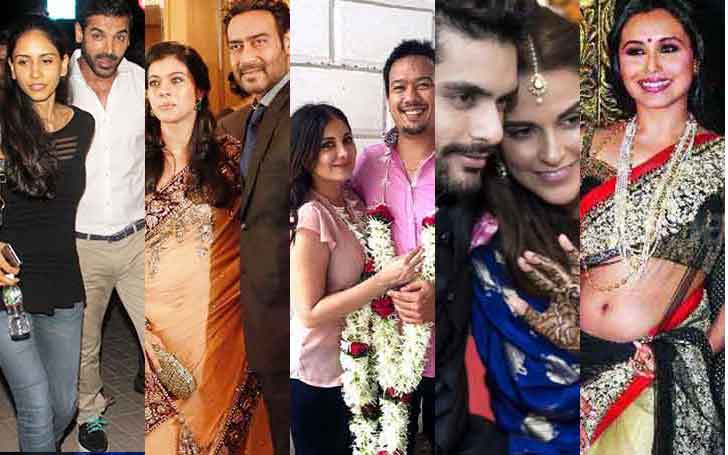 Weddings in Bollywood are usually grand affairs as there is the presence of A-list celebrity guest, utterly amazing venues, marvelous designer outfits as well as heavy designer jewelry, immense media coverage and much more. But besides this, there are also some of the celebrities in Bollywood who loves to keep their wedding under the limelight.

Bollywood marriage looks like a Royal affair and there are many celebrities like Vivek Oberoi and Priyanka Alva, Aishwarya Rai and Abhishek Bachchan, Kareena Kapoor and Saif Ali Khan and other who got a lavish and unforgettable royal wedding celebration.

But today we will be telling you all the about the top 5 Bollywood Secret wedding, marriage, relationship, affairs and wedding destination in detail. Just stick with us.

On 10th May 2018, Neha Dhupia got married to Angad Bedi. Although they were dating each other for a long time, they tied the knot in a very private ceremony. They even didn’t inform their friends about it so that their wedding remains hidden. And in Bollywood, their marriage did come out as a big surprise.

The most handsome men of Bollywood, John announced his wedding with Priya via “Twitter”. John married his long girlfriend Priya in a private ceremony. Their marriage ceremony was a hush-hush that was only attended by their family and close friends.

The most elusive couple of Bollywood, Rani Mukerji and Aditya Chopra tied the knot with each other on 21st April 2014. As their wedding was attended by 12 people and their wedding is regarded as the super-secret wedding in Bollywood.

Moreover, at present, Rani is living a happy married life and has completed 4 years of successful marriage with Aditya Chopra.

After Shahid Kapoor made headlines of his wedding with Mira Rajput, Minissha also tied the knot with her long-term boyfriend Ryan Tham. Pooja Bedi was the one who revealed about Minissha and Ryan’s wedding via Twitter. Their wedding was attended by their family member.

Although Kajol and Ajay tied the knot in 1999. Their wedding is not a secret at present, they followed a very low and private affair. Their marriage was only attended by only their family members and their wedding pictures were not even leaked on the internet for several years.

Moreover, at present both of them are living a happy married life with their children- Yug Devgn- son and Nysa Devgn- daughter.