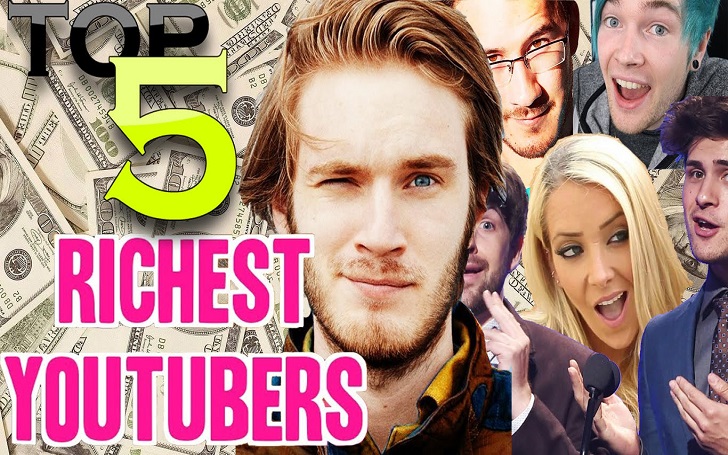 You never get bored with YouTube. Youtube presents content creators they are commonly called ‘YouTubers” and with an entirely new chance to produce a video for large, engaged audiences. And the platform has earned attention on pop culture and has its effect on marketing landscape too.

Youtubers are often called YouTube personalities or Youtube celebrities. They are a class of Internet celebrity and videography who gained popularity from their videos on Youtube. And here’s the list of the top 5 Richest Youtubers of 2017.

A Swedish web-based comedian and video producer, PewDie Pie is the world’s richest Youtuber. He is best known for his Let’s Play commentaries and vlogs on Youtube which boasts over 44 million subscribers worldwide.

Pwe’s subscribers count in now over 54 million and his annual income is estimated at $15 million. The main focus of his videos is the commentary and reactions to various games as he plays through them, due to this his videos fall under the Let’s Play Umbrella.

Smosh is an American sketch comedy YouTube channel created by Ian Andrew Hecox and Daniel Anthony Padilla. The two create parody and satire videos for Youtube. In 2003, Padilla created the channel after wanting a platform to share his flash animations too, but it wasn’t until later on that he was joined by Hecox.

Their channel has garnered 22 million subscribers and was among the first Youtube celebrities to earn wax status at Madame Tussaud‘s. And recently, the two announced that they would head up a new Youtube series, with annual earnings of $8.5 million.

One of the Smosh’s earliest video, “Pokemon Theme Music Video” followed the same style as their other earlier videos which featured the duo lip-synching the original English theme song of the Pokemon anime.

Benny fine and Rafi Fine, together are known as Fine Brothers. They are the online producer, writer, and directors. They are best known as for their React video series, timed-spoiler series, narrative web series and much more.

The Fine Brothers are a comedy duo who make pranks and sketch video. Youtube channel recently attracted attention for their six-minute recap of the newest Star War film with earning of $8.5 million a year.

Lindsey gained popularity through her YouTube channel. She was named one of Forbes Top 30 musician Under 30 and she became a quarterfinalist on the talent competition American’s Got Talent.

She found a place on the Billboard Chart for the album Shatter Me with an income of $6 million per year.

Rhett and Link are an internet comedy duo. They are a self-proclaimed entertainer and makes funny videos, sketches, and ridiculous local commercial as well as a talk show.

They are responsible for the viral videos and also run a television show on the IFC Network with an earning of $4.5 million annually and are Youtube’s fifth highest paid celebrities.

For more information just be with us Dodoodad.