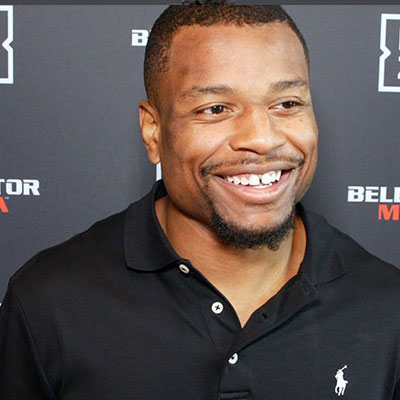 Tywan Claxton, popularly known as Speedy and Air Claxton, is an American mixed martial artist who currently fights in Featherweight division of Bellator. The fighter has just begun his professional career and has a record of 2 wins so far. He is associated with Strong Style Fight Team.

The fighter seems to be single at the moment. He does not have any public relationships until now. However, Claxton may be dating someone in secrecy.

Claxton was born on 11th November 1992, in Fort Lauderdale, Florida. The identity of his parents has not been revealed yet. Regarding his nationality, he is an American. His ethnicity is black.

Instagram: Tywan Claxton as a child and his certificate;

Furthermore, Claxton is a well-educated man. He attended Frank L Wiley Middle school. He was a good student and was awarded the National Mathematics Award by the United States Achievement Academy.

Additionally, Claxton attended university in Ohio and has a degree in healthcare marketing. He also taught himself coding and uses his spare time on the computer.

Despite having a degree in healthcare marketing, Claxton chose another route for his career. He fell in love with gym and fighting. As an amateur, the fighter has fought in Cage Madness and XFN. Claxton has not lost a single fight in the events.

Tywan debut fight was against Luke Nelson in Caged Madness which he won via a TKO in the first round. He has defeated opponents Dominique Ayers, Elvin Espinoza, Timothy Lewis, and others in his amateur career.

Soon, Claxton was signed by Bellator MMA. His first fight was against Jonny Bonilla-Bowman on 3rd November 2017. His Bellator debut had people talking as the fighter won in the first round via a KO thanks to his flying knee.

The viral flying knee got him the nickname, Air Claxton and made him famous overnight. He is now the front-runner for “Knockout of the year”.

Claxton’s second professional bout was on 16th February 2018, against Jose Perez. The fighter has won the fight in the second round via a TKO. After his explosive debut, Claxton had a lot to live up to. His second bout might not have been as memorable as the first one but the fighter has shown immense potential.

Taking his personal life into account, Claxton has yet to make his dating life public. He has not been rumored to be in a relationship with anyone as of now. So, we can assume he is single. Perhaps the fighter wants to keep in dating life private for now.

Nevertheless, there is a possibility that Claxton is dating in secrecy. The fighter may not be ready to expose his dating life to the public eye. He once mentioned that he preferred to date Hispanic women.

Tywan Claxton earns a good sum of money in his career. The value of his Bellator contract is not revealed yet. He posted a picture on Instagram stating that his bank balance increased from-$238 to $526 after going pro. The source of his income are the bouts and endorsements. He has won both his professional fights which must have fetched him a hefty amount.

Claxton has his own merch that is sold online. The business venture must also pay him well. The fighter is still at the beginning of his career. We can expect to see much more from him in the coming days. Allocating information from several sources as of 2018 it is found out that Claxton current estimated net worth is around $600 thousand.