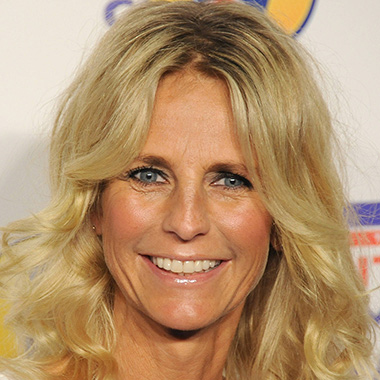 Eva Ulrika Jonsson is a Swedish television personality. She is known for her work as a TV-am weather presenter. She had completed her college from Secretarial College. She can speak different languages fluently including English, French and Swedish. She is the granddaughter of Swedish opera singer whose name is Folke Jonsson. She is a beautiful lady. Though she is 47 years old she manages to look younger than her age.

She had started her career since 1988. Firstly she had worked as a secretary. Later on in 1989 she started her career on television from TV-am. There she had worked as weather presenter. After that in 1991 she had co presented Who’s Buffing Who?, a short lived daytime quiz show. In the same year she had also acted in a French movie named The Annunication of Marie. The film was critically acclaimed. The next year in 1992 she had hosted various shows including The National Lottery, Gladiators and also she had hosted Eurovision Song Contest in 1998 and Miss World in 1999. During that time she had also done modeling for Playtex Lingerie. After that in 1997 and in 1998 she had interviewed British Prime Minister whose name is John Major for program named The Enormous Election and Chancellor of the Exchequer, Gordon Brown for Ulrika in Euroland respectively.

She had also presented a show named The Joy of Text in 2001. For BBC1 she had presented a reality game show named Dog Eat Dog from 2001 to 2003. After that in 2002, she had also presented a TV makeover show named Home On Their Own. The show was about how the children wanted the house to be. In the same year, she was also a subject of a documentary named Ulrika Jonsson: the Truth About Men on Channel 4. The documentary had received heavy press attention. In 2007 she had also appeared on a confessional program of Channel 4 which name was Ulrika: Am I A Sex Addict? On 1st September 2011, she had written her first novel named The Importance of Being Myrtle.

Ulrika has married three times. She has four children. Her first husband was John Turnbull. He is an English rock and pop guitarist and a singer. The couple has a son together. But due to some reason they did not made it out and got divorced after five years of marriage. Her second husband was Lance Gerrard-Wright. The couple has a daughter together. They also got separated after three years of marriage. Her third or present husband is Brian Monet. The couple has a son and they have also legally adopted a child. Her current husband is an American advertising executive.

She is a very beautiful lady. She stands a height of 5 feet 7 inches. Her photos are available on the internet. Yet in her late forties, she looks very charming and beautiful. She is active in social networking sites including Face book, Twitter, Instagram, etc. Her follower can follow her on Facebook or on Twitter or any other sites in which she is active. Her estimated net worth is not disclosed yet. Recently on 7th March 2015, she had attended National Exibition Centre at United Kingdom.