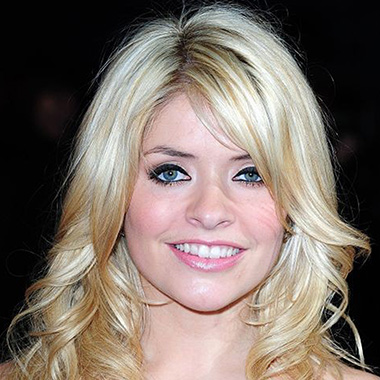 Holly Willoughby is a very lovely and gorgeous English television presenter as well as a model. She is mainly known for her television work with ITV.

Holly was born on February 10, 1981, in Brighton, England. Her full name is Holly Marie Willoughby. She is the younger daughter of a sales manager of a double-glazing company. She was educated at the Burgess Hill School for Girls which is located in Burgess Hill in West Sussex. She also attended the College of Richard Collyer located in Horsham. When she was 14 years old, she was spotted at The Clothes Show Live exhibition in 1995. She was signed by Storm Model Management. She was seen in teen magazines for girls including Just Seventeen, More! And Mizz. When she was 17 years she started modelling underwear for clients which also includes Pretty Polly to appear in advertisement and posters.

Holly Willoughby auditioned for a show called S Club TV and in 2000 she won an audition. The actors have represented an alternative S Club in this show. She was also seen playing a character called Zoe in a show S Club 7: Artistic Differences. She during her early days worked as a receptionist. She also did mental jobs and started psychotherapy course in an Open University. Later she worked as assistant manager. She there persuaded a friend to make a show reel of her. She presented a factual environment programme for children called Xchange in 2000.

Holly Willoughby also went on to host several other children’s shows for CBBC at the Fame Academy and CBBC: X-perimental. In 2004 she re-joined CITV and co-presented their entertainment show Ministry of Mayhem. While working on the programme she met her future husband Dan Baldwin. Later the title of the show was changed to Holly & Stephen’s Saturday Showdown in 2006. The name was changed in order to reflect the popularity of its co-presenters Stephen Mulhern and Willoughby. She presented a children’s entertainment programme Feel the Fear in 2005. The programme presenters are set unnerving challenges. In 2004 she co-presented the final of the children’s version of Stars in Their Eyes.

In the spring of 2005, Holly presented CD: UK replacing Cat Deeley. In 2006 she co-presented Dancing on Ice with Phillip Schofield. The celebrities are partnered with professional dancers to learn ice-dancing judged by experts and are voted by the public. She worked there until 2011 due to new commitments. She has also presented Celebrity Wrestling: Bring It On, Greased Lightnin and The Xtra Factors. She then became the presenter of Streetmate in 2007. It is a dating game show. She also co-presented Holly & Fearne Go Dating with Fearne Cotton. She was seen as a team captain on Celebrity Justice since 2008. It was hosted by Keith Lemon and Fearne Cotton. Replacing fern Britton she co-presented This Morning with Phillip Schofield. In 2011 she co-presented Text Santa with Ant & Dec. She is currently hosting a new sports-based panel show Play to the Whistle.

Holly Willoughby married Dan Baldwin on 4 August 2007. He is a producer on Ministry of Mayhem. The couple has a son named Harry James Baldwin. She also has a daughter named Belle Baldwin. She also said that she was expecting her third child on Twitter. In September 2014 Chester William Baldwin was born. As of 2016, Holly Willoughby’s net worth is estimated to be £10 million.