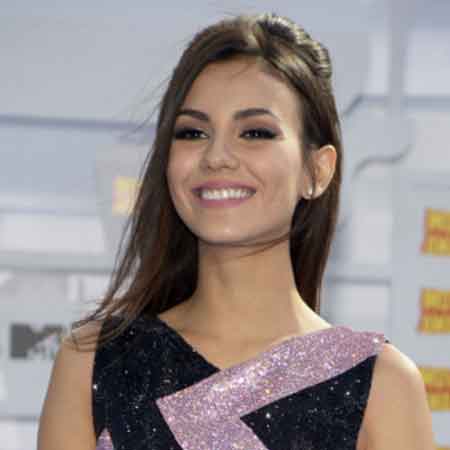 The two times Young Artist Awards winner, Victoria Justice is an American actress as well as a singer. She is known for her portrayal role as Lola Martinez in the television series, Zoey 101. Her other popular roles are in The First Time, Naomi and Ely’s No Kiss List etc.

Victoria Justice was born on 19th February 1993, in Hollywood, Florida, United States. Her father Zack Justice is of English, German, and Irish descent and mother Serene Reed from the Bronx. Justice grew up along with her younger half-sister, Madison Grace Reed.

In 2003, Justice and her family relocated to Hollywood, California. Before completing her diploma through a homeschool program, Justice attended the Cleveland High School.

At the of 10, in 2003, Victoria Justice began her acting career through Gilmore Girls as Jill. After that in 2005, she guest-starred in series The Suite Life of Zack & Cody. The same year, Justice made her movie debut starring in Mary and also in When Do We Eat?

Likewise, she then starred in series, Zoey 101 as Lola Martinez which helped her earn win two Young Artist Awards. Moreover, Justice gained further recognization after she starred in the popular series The Naked Brothers Band. Her popular movie roles are in The First Time, Jungle Master, Naomi and Ely’s No Kiss List etc.

Justice earned a huge fame for her role as Tori Vega in her own musical show on Nickelodeon called Victorious. She appeared in the regular show from 2010-2013. After that, she appeared in other series including Big Time Rush, Eye Candy etc. Justice recently gave her voice in the series Robot Chicken.

The 25 years old gorgeous actress, Victoria Justice was in a relationship with Pierson Fode. The duo began dating back in 2013. But their love life didn’t last long as the couple separated in 2016 after dating for three years.

Currently, Justice is dating Reeve Carney who is an actor, singer, and songwriter. The couple began dating in December 2016 and since then they are still together. They met each other on the set of The Rocky Horror Picture Show: Let’s Do the Time Warp Again.

Although the couple is still dating, they haven’t mentioned any plans of getting engaged or married. Besides this, Justice further dated Ryan Rottman, Nicholas Hoult, Josh Hutcherson and Cole Sprouse.

Being such a versatile actress, Victoria Justice earns an astonishing amount of money from her acting career. Justice has maintained a standard life. As of now, Justice has an estimated net worth of $10 million.

She was paid the salary of $12,000 per episode of Victorious. Justice owns an apartment in Hollywood California, United States. She owns several cars including BMW 7 worth $97945 and Mini Cooper Cabrio worth $27,400. Likewise, Justice further owns two dogs of Cockapoo breed worth $1000-$1400.