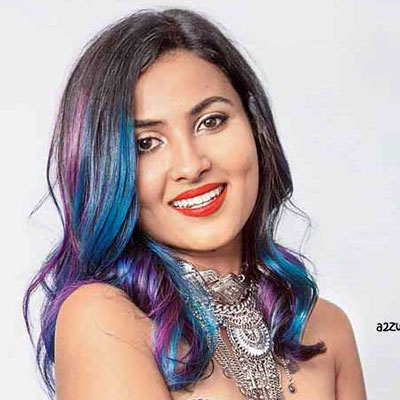 An Indian-American You Tuber and Singer, Vidya Iyer, better known as Vidya Vox earned wide recognition on the internet after her mashup of Major Lazer’s Lean On mix with Punjabi folk songs has 31 million hits on YouTube.

Vidya started her channel in 2015 where her videos have over 366 million views and score over 4.1 million subscribers. She also collaborates with her boyfriend, Shankar Tucker, a composer-director-musician.

Vidya was born on 27th September 1991 in Chennai, India. Her family moved to Virginia when she was five years old and started learning Carnatic music. She was inspired by her grandmother and dream to pursue her career in Indian classical music.

[ CAPTION: Vidya Vox at the age of four ][ SOURCE: Instagram ]

Vox enrolled at the George Washington University where she completed her bachelor degree in biological sciences. She joined the Indian Student Association while attending college and also enrolled at Indian folk dance teams.

Vidya’s interest in music led her to open her own YouTube channel and started posting a mashup of Indian and western music. Her mashup quickly earned wide recognition and her “Lean On/Jind Mahi” video which was collaborated with Sam Tsui, Ricky Jatt, Raashi Kulkarni and Roginder “Violinder” Momi hit several likes and subscriber in YouTube.

Vidya Vox has released several videos and among them, her “Closer/Kabira” mashup was quite popular. The mashup hit 55 million views within 7 months of release. She has also covered songs of Ellie Goulding, Ed Sheeran, Taylor Swift, Sam Smith, etc.

Till now, Vox has performed live along with her band members around the globe. She has also performed sold-out shows in some of the coolest places such as the White House, National Center for the Performing Arts in Mumbai and Webster Hall.

Vidya’s power of creativity for the fusions and the selection of songs has earned wide appreciation. In an interview, she told that it took several hours to create the combinations and so do we can enjoy the music.

The famous YouTuber, Vidya Vox is currently dating boyfriend, Shankar Tucker. He is an American clarinetist and music composer who is well-known for his YouTube music channel “The ShrutiBox”. The couple met each other in college and having the same hobbies and interest the couple fell in love.

Though the couple hasn’t married, they live together and often collaborate. Beside dating and affairs, Vidya is also very close with her sister, Vandana Iyer and family members. Her sister is also a singer and YouTuber. Moreover, she often talks about her grandmother who was the main source of inspiration.

Being YouTuber and Singer, Vidya Vox earns the good sum of money in her career. She has millions of views and subscribers on YouTube through which she is able to make a huge sum of money. As per other sources, it is found out that her monthly income is $8k – $137k and Yearly $102k – $1.6 million.

Moreover, Vidya has also a luxury house in Virginia, USA. Allocating information from several sources it is found out that her recent net worth as per 2018 is $3.2 million or 20 Crore INR.