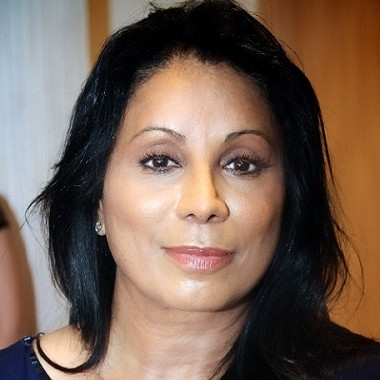 Wanda has been in a relationship with Jimmy Smits, an American actor, who played attorney Victor Sifuentes on the 1980s legal drama L.A. Law.

Wanda De Jesus was born on 26th August 1958, to parents of diverse descent in Manhattan, New York, USA. Her mother was a nurse in Puerto Rico before she came to the United States. At the age of 13, the native New Yorker was accepted to the High School of Performing Arts.

The school, the model for the TV show Fame, but with a heavier curriculum, holds many memories for the actress. After graduating with a B.F.A. degree from The Leonard Davis Center for Performing Arts, part of City College of New York, she did a lot of theater.

She got turned on to acting by watching Peter O’Toole do ‘The Lion in Winter’ when she was a kid. It was the actress’ work at the Public Theater that ultimately took her to Broadway. The play ran for about six months at The Public and a year on Broadway with Robert De Niro.

While appearing on Broadway, DeJesus got her first taste of daytime the role of Gomez,  on television soap opera series “Another World” in 1986.  It was created by Irna Phillips and  William J. Bell. Which and was produced by Procter & Gamble Productions at NBC Studios.

Then, she became the star in the nighttime series “Mariah,” played the role of Leda Cervantes in 1987. That shot up in Toronto and had a life for about seven months. It got good reviews.  When Mariah was canceled, DeJesus kept herself busy with episodic work and theater.

Following years, she featured legal drama series “L.A. Law”, where she played Ms. Santiago. The series reflected the social and cultural ideologies of the 1980s and early 1990s. Many of the cases featured on the show dealt with hot topic issues such as capital punishment, abortion, racism, gay rights, homophobia, sexual harassment, AIDS, and domestic violence.

In 1988, she made her appearance on two series The Pursuit of Happiness as Mrs. Lopez and Tales from the Darkside as a Telephone (voice). Some episodes of the series were written by or adapted from the works of famous authors. Stephen King’s short stories “Word Processor of the Gods” and “Sorry, Right Number” were amongst them.

She made her main notable role as the fourth actress to portray Santana Andrade in NBC’s soap opera “Santa Barbara” from 1991-1992. The series won 24 Daytime Emmy Awards and was nominated 30 times for the same award.

The show also won 18 Soap Opera Digest Awards and won various other awards. Santa Barbara aired in over 40 countries around the world. It became the longest-running television series in Russia. The series was created by Bridget Dobson and Jerome Dobson.

In 2003, she won Imagen Award in the category of Best Actress in a Television Film “Almost a Woman.” The film was directed by Betty Kaplan, which was based on the autobiographical book of the same name by Puerto Rican writer Esmeralda Santiago. This movie is about a young woman named Esmeralda and her family who move to New York from a rural area of Puerto Rico.

From 2002-2003, she had a recurring role on the CBS crime series “CSI: Miami,” where she played the role of MDPD Detective Adelle Sevilla. In 2006, BBC News published an article stating that CSI: Miami was the world’s most popular television series, featuring in more countries’ top ten rankings for 2005 than any other series.

In 2010, De Jesus was cast as the head of the police squad on “Law & Order: Los Angeles,” but the role which had already been changed significantly before De Jesus joined. The role was changed again and reshot with a different actress after two episodes had been filmed.  The series was created and produced by Dick Wolf and developed by Blake Masters.

In 1990, Wanda debuted in the police action comedy film named “Downtown.” Richard Benjamin served as a director. At the same year, she featured in the cyberpunk action film “RoboCop 2” as  Estevez, directed by  Irvin Kershner. She played a role, Luisa Diaz along with her co-stars  Peter Weller, Nancy Allen, Dan O’Herlihy, Belinda Bauer, Tom Noonan, and Gabriel Damon.

In 2000, she landed in a role of Jackie in the film “Once in the Life.” Where Laurence Fishburne, served as a director, writer. Fishburne adapted the script from his own play, Riff-Raff.  She appeared in the science fiction action horror film “Ghosts of Mars”, where she played a minor role

In 2001, she appeared in the sci-fi action horror film “Ghosts of Mars,” where she played a small role Akshay in 2001. She appeared along with Ice Cube, Natasha Henstridge, Jason Statham, Pam Grier, Clea DuVall, and Joanna Cassidy.

In 2007, Wanda made her breakthrough role in the film “Illegal Tender.” She appeared alongside Rick Gonzalez and Dania Ramirez. She played Millie De Leon, for which she was nominated for Imagen Awards. The film was directed and written by Franc, Reyes and produced by John Singleton.

Wanda De Jesus has been in a relationship with Jimmy Smits, an American actor, who played attorney Victor Sifuentes on the 1980s legal drama L.A. Law. The couple has been living together since 1986. They met in New York and worked has together on Cuba.

Jesus loves to work with him, and she knows the feeling is mutual. She was the lady when Jimmy first started L.A. Law & Order, where she used to help him with certain scenes.

Wanda De Jesus earns a good sum of money in her career. She has featured in several movies and tv series through which she receives a decent amount of money as salary.

Allocating information from several sources as of 2018 it is found out that Wanda De Jesus accumulated current estimated net worth is around $10 million. Both Jesus and her partner Jimmy Smits, who is still not her husband, have a combined net worth of around $20 million.