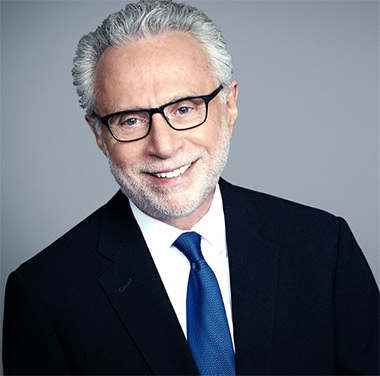 Wolf Isaac Blitzer was born on March 22, 1948, in Augsburg, Germany. He is famous television news anchor, Journalist and CNN reporter.

Wolf is the CNN’s Networks political anchor and the host of show “Wolf” and “The Situation Room”. He had used his name as Zev Blitzer and Zev Barak while writing for Israeli Newspaper in Washington. Blitzer was raised in Buffalo and attended Kenmore West Senior High School. His parents  who survived Holocaust are Jewish refugees.  His name Wolf was taken from his maternal grandfather. In 1970he did his Bachelor of Arts from State University in History of New York and Masters of Arts in International relation from John Hopkins University in 1972. He also studied Hebrew in Jerusalem.

Ari Rath, Jerusalem Post editor, hired Blitzer to work for Israeli newspaper as a correspondent in Washington in 1973.  Prior to this, he used to work in Reuters news agency in Tel Aviv bureau in 1970. AIPAC, a committee for American Israel Public Affairs used to publish the monthly publication in mid-1970’s where Wolf used to contribute as editor and focus on current affairs between the Middle East and the United States, Middle East Development and Foreign policy of United States.

Blitzer interviewed Anwar Sadat in 1977 at White House Press Conference and asked him “Why Egyptian athlete, scholars, and journalist are not permitted to go to Israel?”. Due to this question Sadat had to acknowledge there is not a good relation between two countries.

In November 1997 Wolf covered the news when Sadat visited Israel and the negotiation was held between two countries.
Blitzer worked in Jerusalem post until 1990 as a correspondent and moved to work in CNN.

Blitzer first book is “Between Washington and Jerusalem: A Reporter’s Notebook” published in1985.His next book was “Territory of Lies” which was based on Jonathan Pollard and his affairs, who was arrested for spying for the United States for Israel. In the book, he mentioned that Pollard wants Wolf to help him to reach Israel and other Jewish community. This book creates a lot of controversies.

In CNN Wolf used to report military affairs and he is a first western reporter to report from KGB headquarters, Moscow in 1991. Blitzer won CableACE award for his team’s coverage of Gulf war in Kuwait.Wolf has covered several important news like Hurricane Katrina, 9/11 attacks, and 1999 Tsunami.

Wolf was awarded Emmy award for covering Oklahoma City Bombing in 1995.Blitzer was CNN’s White House Correspondent from 1992 to 1999 and in 2000 he began to host his own show “Wolf Blitzer Reports”.Wolf covered the presidential election of 2004, 2008 and 2012 for CNN.Blitzer was awarded Daniel Pearl Award in 2003 and Journalist Pillar of Justice Award in 2004.