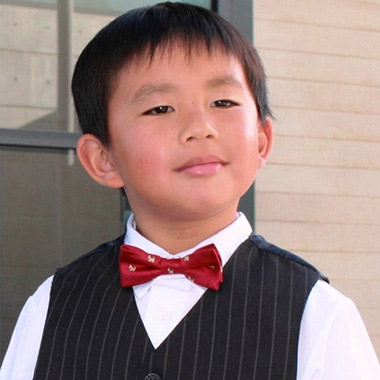 Albert Tsai is an American talented actor, born on August 5, 2004. He is famous for his role in ABC’s comedy series “Trophy Wife” as Bert Harrison.  He was first seen on CBS’s “How I meet Your Mother”.

Albert Tsai was born in San Jose, California, United States. In the ABC’s series Trophy Wife he plays  the character Bert who is the adopted son of Pete Harrison and Jackie Fisher, who are the important character in series. Jackie is the second wife of Pete. Bert is a Chinese character.

Tsai is seen as a guest star in How I Meet Your Mother and Hot in Cleaveland.Tsai was nominated for “Best Supporting Actor” for his role Series Trophy Wife by the Critics Choice Television Award in 2014. He also became the youngest actor for this nomination in the world. He was only 9 at the time.

The show Trophy Wife was premiered in 2013/14 and used to have good audiences. IMDB rated 6.9/10 for this series which has 22 episodes. The show had average viewers of 5.8 million viewers.The Huffington Post, E! Online and Hollywood.com named him “The Breakout TV Stars of 2013”.

Tsai has now appeared in ABC’s new comedy project Dr.Ken in the opposite of Ken Jeong. Ken Jeong, Mike O’Connell, and Jared Stern wrote the script and Tsai will be acting as the son of character Dr.Ken. Jeong will be playing as HMO doctor.Ken and Tsai were previously seen together in an episode of “Hot in Cleaveland”. Tsai is also going to be appeared in Fresh Off the Boat where he is going to play as Phillip.

Tsai acted in a school play when he was seven years old and he developed the passion for acting. Besides acting, he loves to travel, read, swim , dance and also horse riding. He enthusiastically learned Yiddish to act as Bert in Trophy Wife. He has visited various parts of United States, Canada, and Asia.

Tsai also uses several social networking sites but he takes his mother’s permission to post any photos. You can follow Tsai on Facebook and Twitter to know more about him. Pictures of him are easily found on the internet. Tsai loves spending time with his mother and baking with her in the kitchen. His parents are sales executives.

Albert is a very skilled, energetic, and bright child and he really loves what he does. He can perform any character fabulously. He had drawn lots of viewers and fans and make them fall in love with him. In the show PopSugar, he advised all the young actors to believe in themselves and do what they like most.

Albert is a chubby little cute boy with a good sense of humor. His height is 4 ft and 7 inches. Everybody has speculations that he has a great future ahead. Many good directors already want to work with him and he is gonna take lots of roles as a child actor in lots of movies and series.