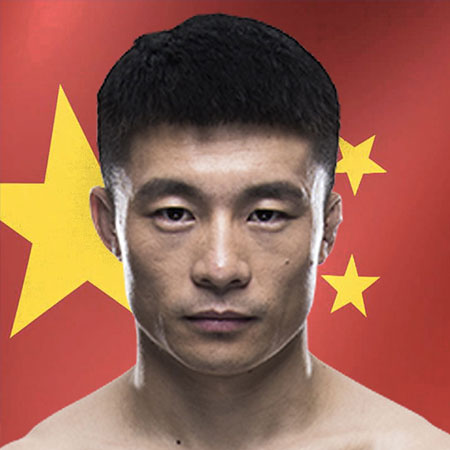 Wuliji Buren, also known as The Beastmaster is a Chinese mixed martial artist who currently competes in featherweight division of Ultimate Fighting Championship. Prior to this, the fighter has competed in RUFF, Kulun Fight, CKF, WBK, and AOW. The fighter has been professional since 2014. He has a professional record of 9 wins and 4 losses.

Buren is a private man. His dating life has been a point of curiosity for many of his fans. However, he has kept his personal life under the radar.

Wuliji Buren was born on 1st March 1989. He is a native of Chai Feng, Nei Mongol. He is of Chinese nationality. Aside, the information about Buren’s parents is disclosed.

As for his education, the fighter did not attend college. Before beginning his MMA career, Buren was involved in wrestling. He left his wrestling team to train for MMA in 2013.

In his wrestling career, Buren won the third place in China National Shuai jiao Tournament(traditional Chinese wrestling). His professional MMA debut was against Nannan He in Ruff 12 on 29th March 2014. Buren won the bout via unanimous decision.

Buren was then able to maintain his winning streak for five more fights against Chumbo Yuan, Changxin Fu, Ali El Ezzabi and others in RUFF, CKF and Kunlun Fight. The MMA fighter then faced his first professional defeat against Chengjie Wu in WBK 4.

Buren has since fought and won against Roman Lutsenko, Sirozhiddin Eshannaev, and Beno Adamia in different promotions. On the other hand, he lost against Alexandros Michalidis, Yuri and Dong Gyu Kim.

The fighter then competed in Featherweight division of Chi Woo. He won against Zhu Rong and Ye Yuan making him the Chin Woo Men FC Featherweight Champion. Buren was then signed by the UFC.

Buren’s UFC debut bout was against Rolando Dy on 25th November 2017. He lost the fight via unanimous decision in the third round. The fighter is now set to face Indian MMA fighter Bharat Khandare on 4th August 2018, in UFC 227 which will be held in the US.

Buren is a private man when it comes to his personal life. Moreover, he is not active on social media sites like Facebook, Twitter, and Instagram. There is no information about his love life. He has successfully kept his dating life away from the limelight.

So far, there has been no rumors of the fighter dating anyone. We can assume that he is not married yet. He is possibly a single man. However, he could be dating privately. Buren seems more focused on his career.

Buren has earned a lot of money from his successful MMA career. The source of his income is the fights. The value of his UFC contract is not disclosed yet. According to sources, his total UFC earnings sums up to $14,000.

The fighter’s net worth is currently under review. Buren has not disclosed his exact salary. He is still active in his career. Buren’s next UFC fight has been much anticipated from fans. We can expect to see more from him in the coming days.