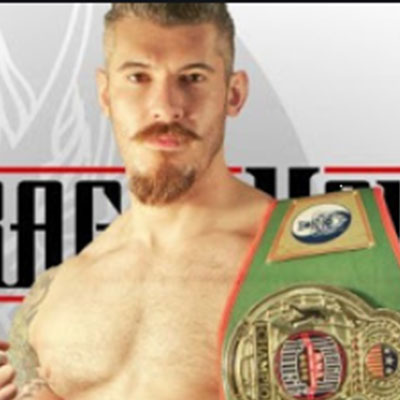 The professional American mixed martial artist, Zak Bucia is popularly known as Crash. Bucia is associated with Lawrence Fight Club. He has a record of 18 wins and 10 loses. He is the current Wyoming Sports Combat Association Welterweight Champion and Dragon House MMA Welterweight Champion.

The fighter is in a relationship with girlfriend, Ashleigh Lotti Lottinville. The couple is currently expecting a baby boy who is due in September.

Zac Bucia was born on 27th September 1984, in Lawrence, Kansas. The information regarding his parents has not been revealed yet. He has kept such personal information under the wraps. Regarding his nationality, he is an American and belongs to white ethnicity.

Taking his education into account, Bucia attended Lawrence high school. After graduation, he began his studies in personal training/fitness at WellSpring School of Allied Health. His subject is related to the career that he has chosen.

The fighter began his career back in 2007. His debut fight was against Pat Mihnhan in Gladiator Challenge on 7th July 2007. He lost the bout but did not lose hope. His second bout was against Justin Holdaas which he won via punches.

Zak also fought in Strikeforce: Destruction against Adam Steel and James Terry. He was victorious against Steel but lost to Terry.

Bucia’s Bellator debut was against Neiman Gracie on 20th October 2017. He was unsuccessful in the fight and lost by a head attack. The fighter was supposed to face Zach Freeman for his second fight in Bellator but it was canceled. He then fought Derek Anderson on 13th April 2018 but was defeated.

Lottinville is now pregnant with Bucia’s son. The baby is due in September and already has a name. Bucia introduced him to the world with a sonograph calling him Pythagoras Alan Bucia.

However, the couple is yet to be married. Perhaps, they will walk down the aisle soon. Nevertheless, the pair has a beautiful bond. The two frequently share pictures of each other in their respective Facebook pages. Lottinville is very supportive of Bucia.

The net worth of Zak Bucia is $400,000. He has amassed this amount through his bouts. Bucia has won 18 fights till date which must have paid him well. The value of his Bellator contract has not been revealed yet. He lives a comfortable lifestyle in Kansas.

Furthermore, Bucia was reportedly paid $2,000 for his bout against Adam Steel in Strikeforce. He also earned $1,500 for his fight against James Terry in the same event. The fighter is still active in his career. He has been signed by Bellator so we can expect to see more of him in the coming days.