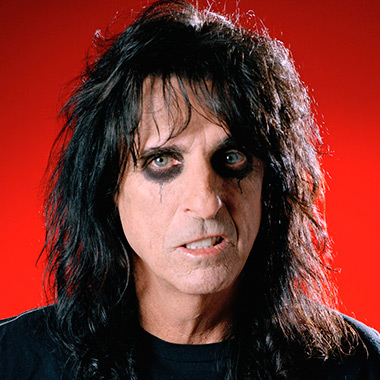 Alice Cooper was born on February 4, 1948, as Vincent Damon Furnier  in Detroit, Michigan who is singer, musician, and songwriter. He is an American citizen. He has also been seen doing acting sometimes. He is known for his unique raspy voice and his wild performance in stages.

Alice Cooper was previously a name of a band with Glen Buxton as lead guitarist, Michael Bruce on rhythm guitar and Alice himself as a vocalist. Later, he adopted his name as his own. In 1971,  their song from the album Love it To Death “I’m Eighteen” was a big hit and the band was known internationally. Their album Billion Dollar Babies was commercially successful in 1973.

Fournier then started his solo career as Alice Cooper since 1975. His first album as Alice Cooper was “Welcome to My Nightmare”. He has worked in 26 albums out of which 19 were his solo album. He has been practicing numerous types of music like experimental rock, industrial rock, new wave, pop rock, hard rock and art rock.

He is considered as the first to introduce horror rock and roll to the world. He was named in Rock and Roll Hall of Fame in 2011. He is occasionally actor and also a film director. He hosts a radio show Nights with Alice Cooper which is very popular. Cooper father and grandfather were active in church as well as him when he was 11. He Graduated from Glendale Community College.

His first participation in talent show was at the age of 16 and his team also won the show. They participated under  the name Earwigs and they performed the songs of Beatles. At that time they don’t know well to play instruments but when they won the talent show they buy musical instruments from a pawn shop and started to learn to play music.

Alice and his friends who won the title now started to perform under the name spider in various places of Phoenix.  Their first recorded song was “Why Don’t You Love me” in 1966  which they cover. This song was originally performed by Blackwells. Next year he started to go to Los Angeles to go for playing songs. Their second single “Don’t Blow your mind” was a good hit. The song was recorded in Copper state recording Studio. They began to record more songs and named themselves Alice Cooper.

Cooper’s way of doing a concert in weird makeup and as villain create a lot of controversies but also hugely appreciated by audiences. Once in Cheetah club in California, the club was empty after hearing their songs and due to the negative impact they reflect.

Their first album was a commercial failure and was critically acclaimed. He developed his “Shock Rock” reputation by bringing feather pillow and live chicken in concert.

After getting successful the band toured United states and continuously surprised audience with their “Shock Rock” ability.

Alice Cooper is married to Sheryl Goddard since 1976. He has good earning and has a net worth around $40 million.