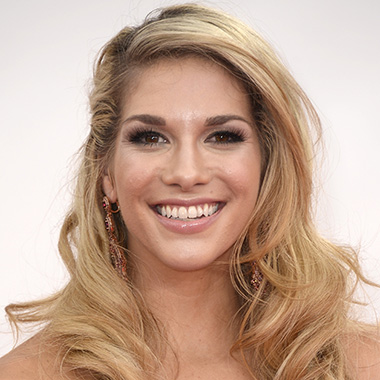 Allison Holker is an American dancer. She is mainly known for performing on So You Think You Can Dance season 2. She also appeared on All-star season 7. As a pro ballroom dance partner, she is in her second season of Dancing With the Stars.

Allison Holker was born on February 6, 1988, in Minnesota, United States. Her full name is Allison Renae Holker. She attended Timpanogos High School and graduated from there in June 2006. When she was nine years old, she started dance training at The Dance club in Orem, UT as a student. She sharpened her skill in contemporary, Jazz, Tap and Ballet. She also has performed in the closing ceremonies of 2002 Winter Olympics. She has won a National competition in Co Dance in 2004. She is also awarded many other dance titles. She is also a member of The Church of Jesus Christ of Latter-day Saints.

In 2002 at the opening as well as the closing ceremony of the Olympic Games, Holker performed with Fire, Wind, and Earth. She also has performed in High School Musical and its sequel High School Musical 2.She took part in So You Think You Can Dance the second season and advanced to the Top 8. She also has danced in So You Think You Can Dance nationwide tour. She also has toured with American Idol’s Clay Aiken. She featured in Christina Perri music video “Jar of Hearts”. She became Demi Lovato’s backup dancer in September/October 2011. She also gives dancing lessons at different workshops across the country. With Stephen “tWitch” Boss, she performed on Dancing with the Stars on April 30, 2013. With Derek Hough, She won the nomination for a 2013 Best Choreography Emmy award.

Allison Holker is mainly known as the competitor, All-star dancer and choreographer in So You Think You Can Dance. She also has shown us her acting skills in television series “Hit The Floor” 1st and 2nd season. In the series, she played as one the Los Angeles Devil Girls named Charlie. The series also stars Charlotte Ross, Kimberly Elise, and Dean Cain. Because of her dancing skills, she showed in So You Think You Can Dance season 2, she got an invitation to return as an All-Star in season 7. She teamed up with the dancer Stephen Boss. In 2011, 2012 and 2013 she continued as an All-Star. She then hosted as well as choreographed the show “A Chance to Dance”. She was also featured in dance series “All the Right Moves”. She has been featured in several television commercials which include drama “House” and the pilot “Grace”. She appeared in “Make Your Move”.

On January 20, 2013, Allison Holker got engaged to Stephen “tWitch” Boss. On 10 December 2013 the couple got married and blessed with a son, Maddox Laurel (born- 27 March 2016). Prior to this, Holker gave birth to a daughter with her ex-fiance.