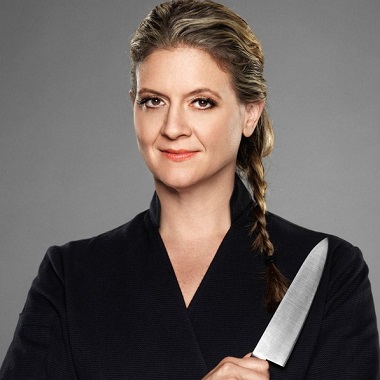 Amanda Freitag is best identified as a New York Chef and guest on Food Networking Television Programming. She is also known for being a judge on the TV cooking competition Chopped and a co-host of program “American Dinner Revival.

Amanda was captured in such a happy mood with Gennaro, that they were comfortable kissing in public. There was an assumption that he was the boyfriend of Amanda. However, she never clarifies about her relationship with him.

Amanda Freitag, daughter of Paul Freitag and Kathleen Freitag, was born on 11th May 1972, in Cedar Grove, New Jersey. She was raised with two elders brother, Jason Freitag and Justin Freitag. She attended Memorial High School, now called Cedar Grove High School. Since her childhood days, she loves cooking delicious food. She was inspired by her mother very much to cook tasty food.

Her interest in cooking was noticed by her home economics teacher, Joan Levine and he suggested her to join Culinary Institute of America in Hyde Park so that she could learn an advanced way of cooking. Hence, she joined Culinary Institute Of America in 1989 where she worked under chef Jean-Georges-Vongerichten while she was 15 years old.

Amanda Freitag, an accomplished chef, started her career by working in restaurants to pursue the culinary occupation. She was also the chef de cuisine of the restaurant where she learned to use locally obtained ingredients from Dianne Forley.

Freitag thirst towards exploring cooking world makes her travel Italy and France in 1999. In Paris, she worked in Arpege Restaurant under Chef Alain Passard where she learned technique and knowledge of cooking through the brief guidance of Alain Passard.

After that, she came back to her motherland, New York and worked at Gusto in the West Village as an Executive Chef position. Again, in January 2008, she became the chef at “The Harrison ” in TriBeCa where her culinary artistry was highly appreciated and achieved positive compliments locally and nationally. She received a two-star review from the New York Times for her performance as executive chef.

She rose her career toward being an excellent chef by taking part in reality competition,  “The Next Iron Chef” Season 2 where she reached fourth place. Again, she participated in “The Next Iron Chef ” Season 5 and almost beat a competitor, Alexandra Guarnaschelli and came to the second place.

Currently, she is working on the television show, “American Dinner Revival on Foodnetwork” with Ty Pennington, an American tv host where they makeovers the menus of dinner. She is hitting the limelight with the popularity of the show.

In September 2015, she released her first cookery book named “The Chef Next Door,” holding more than 100 recipes, revealing 100% practical and advanced method to make food delicious.   This book got lots of positive feedback from the reader.

Amanda is very secretive about her relationship. She is close with few people with whom she loves to spend time. She was seen very close with some guy but she hides whether she was dating with them or not. However, she was spotted with Gennaro Pecchia, Executive Board for the “American Institute For Food and Wine.”

Amanda was captured in such a happy mood with Gennaro, that they were comfortable kissing in public. There was an assumption that he was the boyfriend of Amanda. However, she never clarifies about her relationship with him.

She was also linked up with personalities like Aaron Sanchez, chef and television personality and also with Bruce Seidel, founder of “Hot Lemon Production.” But, she is always quite if it’s the matter of mentioning her affairs with her boyfriend.

Amanda is a renowned chef, co-host of American Dinner Revival, author of cookbook, Television Personality and also appeared in various shows as guest appearance during her career period.

Amanda book, “The Chef Next Door: A Pro Chef’s Recipes for Fun, released in September 2015 was a best-selling book of her. She is earning more than a million from the show like “The Martha Steward Show.”  Allocating information from several sources as of 2018 it is found out that Amanda Freitag current estimated net worth is around $3 million.