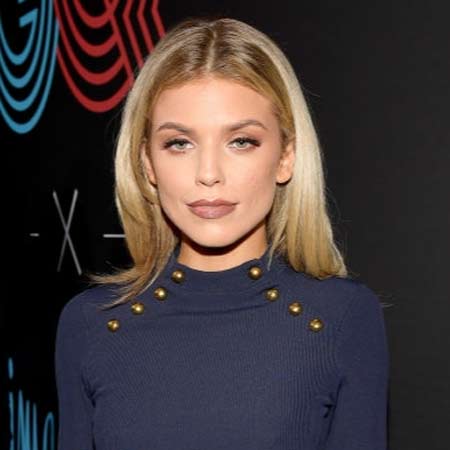 AnnaLynne McCord is a model turned actress best known for her portrayal of the role Naomi Clark in the hit teen drama 90210. She is also known for her role in the TV series like Nip/Tuck, The O.C., CSI: Miami, Secret and Lies, and Beauty & the Beast.

McCord is dating her longtime boyfriend, Dominic Purcell. They split up once and rekindled again after a year of staying apart. As of now, their relationship is sailing smoothly on the waves with no place of disputes and misunderstanding between them.

AnnaLynne McCord was born on 16th July 1987, to Christian pastors. She is a native of Atlanta whereas grew up in Buford, Georgia in the trailer park.

McCord was raised along with her sisters Angel and Rachel McCord. She was home-schooled and joined the Wilhelmina Modeling Agency after graduating from high school.

McCord began her career as a model featuring in ads for the brands like Estee Lauder. She also modeled for an American teen magazine Seventeen. She joined acting in the minor roles in the movies and TV series like The Middle of Nowhere, The O.C., Close to Home, Secret and Lies and many others.

AnnaLynne hit the spotlight portraying the role of Naomi Clark in the 2008 series 90210. She was awarded the Hollywood Life Young Hollywood Superstar of Tomorrow in 2009 for her amazing work. She was also nominated for a Teen Choice Award for Breakthrough Standout Performance in 2010.

She featured in the Los Angeles regional magazine entitled Signature magazine in 2009. She was ranked #22 by Buddy TV on its TV’s 100 Sexiest Women of 2010 list and in #14 in 2011. Moreover, she modeled for the music videos like Baby I’m in Love and Below.

Besides acting, McCord is involved in charity works such as the St. Bernard Project. She is a Goodwill Ambassador for the New Somaly Fund. Herself being a victim of sexual assault she raised voice against molestation and domestic abuse.

AnnaLynne started the No More Campaign to help empower the women and spread the awareness. She is an active speaker who touched the heart of 7 billion people with her rousing speech.

The beautiful blonde, AnnaLynne is in a romantic relationship with her on and off boyfriend Dominic Purcell. Purcell is an actor known for his role in the drama Prison Break. The duo started having an affair since July 2011.

They dated for three years and split up in 2014 eventually reconciling up in 2015 when Dominic was diagnosed with skin cancer. Not only she is close with her boyfriend but looks like McCord adores his children from his ex-wife too.

AnnaLynne previously dated The Twilight Saga actor Kellan Lutz in 2008. The couple broke up after three years of their relationship. AnnaLynne was also rumored to be dating The Have and the Have Nots star Aaron O’Connell. However, they neither confirmed nor commented on the regarding the topic.

Mccord disclosed her traumatic ordeal; she experienced as a youngster at the Somaly Mam Foundation Gala ‘Life Is Love’. She stated that the incident deep-rooted in her mind and haunts her time and often.

Hence, she supports the organization raising funds and gives the motivational speeches against abuse and sexual harassment.

McCord earned a huge amount through her acting career while she also earned some from modeling. She earns a lucrative amount from her profession. Allocating information from several sources as of 2018 it is found out that AnnaLynne McCord current estimated net worth is around $2.5 million. She is living a lavish life from the amount she makes and follows the ongoing trends.