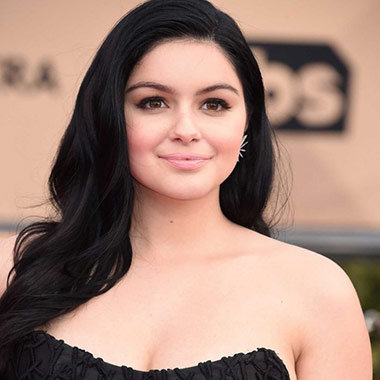 Ariel Winter, birth name Ariel Winter Workman, introduces herself as an American actress and singer. She has also made her identity as a voice actress who has given a voice for the title character in the Sofia the First, Disney Junior show. She came in limelight after she played the role of Alex Dunply in the Television series Modern Family. With her fine looks and pretty smile, she has been able to show her strong presence in Hollywood in early age.

Born on January 28, 1998, in Los Angeles, California to the Chrisoula “Chrystal” and Glenn Workman, Ariel Winter completed her high school education from Campbell Hall School. Her sister Shanelle Workman is also an actress and her brother Jimmy Workman is an actor. Her mother’s family immigrated to the United States from Greek.

Coming to her career, Ariel Winter entered in the entertainment industry at the age of six, when she was offered job from Cool Whip. At the age of 7, she debuted on television with her first role in an episode of Listen Up!. Later on, she appeared on various series such as Tickle U or Tickle U On Noggin, Bones and Freddie. She gave her voice to the character named Gretchen in the animated show Phineas and Ferb. She got a regular role on the character Alex Dumphy for the television series Modern Family which was aired in 2009. Since then she has been contributing her voice to the various characters in the TV animation such as giving voice to the character Marina the Mermaid on Disney Junior’s Jake and the Never Land Pirates. In 2012, she got her first lead role in a new Disney animated series Sofia the First, where she played the role of Sofia. Her most notable feature film was Kiss Kiss Bang Bang and she has also made an appearance in other films such as Opposite Day, Fred 2 and Speed Racer.

Being talented and versatile actress Ariel Winter has received various award nominations including Oustanding Young Ensemble in a TV Series in 2010 and 2011 for her work in Modern Family and won it in 2011. Similarly, she received the nomination for Best Leading Young Actress in a Feature Film in 2012 for her work in The Chaperone. Besides her appearance on television and animated series, she has also given voice to the numerous video game characters such as Young Kairi in Kingdom Hearts Birth by Sleep, as Cassie in Guild Wars 2 and as Moglin in Final Fantasy Type-0 HD.

Gossiping her personal life, Ariel Winter has been in a relationship with her long-term boyfriend Laurent Gaudette since 2013 after she broke up with her previous boyfriend Cameron Palatas. Previously, she had also been linked up Callan McAuliffe. Coming to her relation in the family, she has been in cold relation with her mother and she separated from her mother after she was physically and emotionally abused in 2012. Since then she has not spoken to her mother.

Describing her outer looks, Ariel Winter has a height of 1.55 m and has perfectly maintained body. She has pretty faced and looks sexy when her legs are a show-off in short black skirts. She has estimated net worth of $ 7million (2016). To get more information on this gorgeous actress, you can visit her profile on twitter, Instagram and facebook.