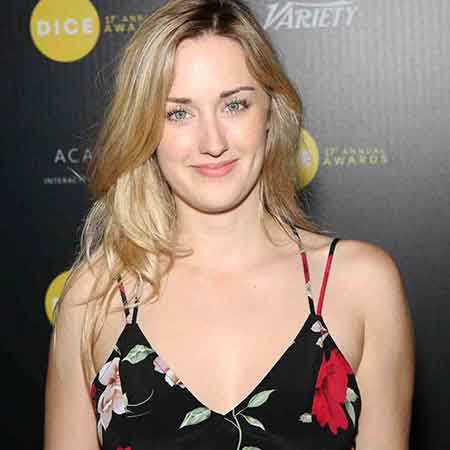 The BAFTA Award winner, Ashley Suzanne Johnson is an American actress, voice actress, and singer. She is famous for the roles in Growing Pains, Teen Titans, and many more. The actress started her career back in 1990 and is still active.

Johnson is in a relationship with Brian Wayne Foster. The two have been together since 2012.

Born on 9th August 1983, Ashley Johnson is a native of Camotillo, California. Her mother, Nancy Spruiell Johnson is an independent film producer while her father Clifford Johnson was the captain of an exploration ship.

She has a brother named Chris Johnson and a sister named Hailey Johnson. Her father passed away in 2000 due to Hepatitis C and cancer.

Regarding her nationality, she is an American. Johnson is of Norwegian, Swedish, Danish, Scottish, Irish, and Native American descent. Johnson moved with her parents to Michigan when she was nine days old.

As for her education, Johnson graduated high school at the age of 15. She also studied and learned to play the piano and violin at the International School of Music.

The actress started her career as a child artist. Johnson was six years old when she was cast as Chrissy Seaver on the sitcom Growing Pains. Johnson made her movie debut in 1990 with Lionheart. After that, her career took off and she starred in many TV shows as well as movies.

In 2000, Johnson appeared in the movie What Women Want. She went on to earn credits in films like Killer Diller, The Help, Avengers, The Failures and many more. She has also lent her voice for movies and series like The First Snow of Winter, Recess, Teen Titans, Ben 10 and many more.

Johnson has also voiced the character Ellie of the widely popular and critically acclaimed video game The Last of US. She won two BAFTA awards for Best Performer for her voice acting. She also took part in a singing reality show and became the runner-up.

Currently, Johnson is busy with the filming of NBC drama series Blindspot.

The 34-year-old is not married yet. She is in a long-term relationship with boyfriend Brian Wayne who is a poet, writer, and singer. The two began dating back in 2012 and are still going strong. They share an adorable bond.

The couple shares many pictures of them together in their social media accounts.

Johnson and Wayne are very close to each other. There have been no rumors of their separation so far. However, they have not taken their relationship to the next level. Perhaps the two will get married in the upcoming days.

Johnson has made a good amount of money from her successful acting career. She has appeared in more than thirty movies and Tv shows. Allocating information from several sources as of 2018 it is found out that Ashley Johnson current estimated net worth is $3 million. The exact figure of her salary is not disclosed yet.

Johnson leads a comfortable lifestyle. She is still active in her career. So, we can assume that Ashley Johnson’s net worth will increase in coming days.