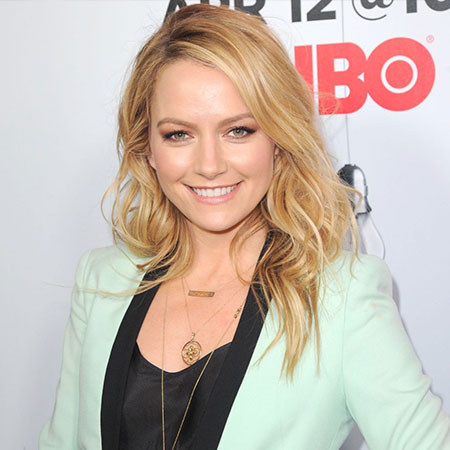 American born actress Rebecca Sara “Becki” Newton, often known as Becki Newton is best known for her roles in the hit television series such as  Amanda Tanen on Ugly Betty and Quinn Garvey on How I Met Your Mother.

Born on July 4, 1978, in New Haven, Connecticut, United States, Beki comes from an artistic family. Becki’s maternal grandfather was a musician, and her aunt Stephanie plays classical violin. Similarly, her brother Matt Newton is an actor, who portrayed the role of Marc St. James’ boyfriend Troy in the fourth and final season of Ugly Betty.

She started to perform musicals and play at theaters around her locality from an early age.

Becki is a graduate of the University of Pennsylvania, where she earned B.A. Degree in European History. Upon graduation, she decided to pursue a career in television and moved to New York. In New York, she started to appear in television commercials for various companies.

Her first television appearance came out in 2001 when she appeared as self on the series Burly TV. Similarly, she made appearances on television series such as Cold Case, Guiding Light, and Charmed before she got her hit role Amanda Tanen in 2006. She portrayed the role of Amanda Tanen on the series Ugly Betty from 2006 to 2010 and received a  Screen Actors Guild Award nomination for Outstanding Performance by an Ensemble in a comedy series.

Becki also received wide appreciation and positive response from critics for her role in the web series Mode After Hours, in which she portrayed the role of Amanda Tanen in 19 episodes. Additionally, her other notable television series credentials include Charmed (2005), American Dad! (2007), The Goodwin Games (2013) and Weird Loners (2015). Becki also appeared in the movie P.S. (2004) as Rebecca and August Rush (2007) as Jennifer.

According to recent news, published on deadline.com, Becki Newton has been picked for the lead female role in Fox’s untitled Chris Case Comedy pilot.

“It’s not a basic human right to be on a hit television show. Most shows aren’t hits. So I’m aware I’ve already experienced both extremes, and now I’m getting to experience everything else in between.”

Newton is a married woman. She married actor Chris Diamantopoulos on May 12, 2005, after dating him for several months. The couple first met at a subway station in New York.