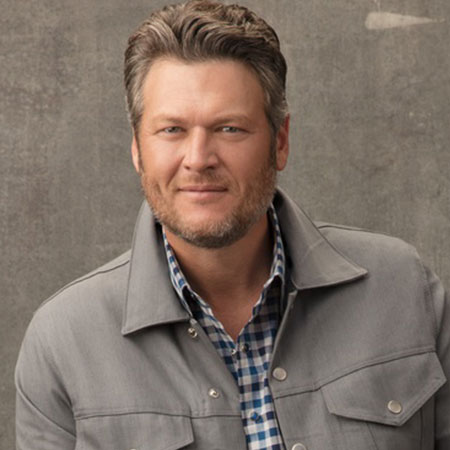 Blake Shelton is an American country music singer. He is also a television personality. He has a gold-certified debut album and Top 20 hits. He has won many awards and nominations.

Blake was born on June 18, 1976, in Ada, Oklahoma, United States. His birth name is Blake Tollison Shelton. He was born to Dorothy and Richard Shelton. Dorothy is a beauty salon owner and Richard is a used car dealer. When he was 12 years old, he began his singing. His uncle taught him to play guitar. He wrote his first song when he was 15. He was awarded a Denbo Diamond Award in his home state when he was 16. His older brother Richie Shelton was killed in an accident on November 13, 1990.

He attended High School and graduated from there when he was 17. He got a job at a music publishing company when he moved to Nashville, Tennessee.

In 2001, he signed a contract with Giant Records in Nashville. He released “Austin” as his debut single. He then was transferred to Warner Bros. Records after Giant Records was closed. His single spent five weeks at No. 1 on the Billboard Hot Country Singles & Tracks. His self-titled debut album was produced by songwriter Bobby Braddock. His album was certified gold by the RIAA. His albums were praised by Maria Konicki Dinoia of Allmusic. On February 4, 2003, he released his second album “The Dreamer” on Warner Bros. Records. The lead single of the album is “The Baby”. His second and third singles are “Heavy Liftin” and “Playboys of the Southwestern World”. His album was certified gold. In 2004, he released his third studio album “Blake Shelton’s Barn & Grill”. The lead single from the album is “When Somebody Knows You That Well”. His album was certified gold

In 2008, he released his fourth studio album “Pure BS”. The singles from the album are “Don’t Wake Me” and “The More I Drink”. He appeared on television shows as a judge on Nashville Star and Clash of the Choirs. His fifth studio album is “Startin’ Fires” and the lead single of the album is “She Wouldn’t Be Gone”. Another single from the album is “I’ll Just Hold On”. On March 2, 2010, the lead single on Shelton’s EP “Hillbilly Bone” was released through Reprise Records. He released his single “Who Are You When I’m Not Looking” from “All About Tonight”. In November 2010, he released Loaded: The Best of Blake Shelton. On November 10, 2010, he appeared on the 44th Annual Country Music Awards. He began to work as a judge on the reality television series The Voice in 2011.

On July 12, 2011, he released the album “Red River Blue”. The single from the album is “Honey Bee” and in its seventh week, it was certified gold. The album reached at No.1 on the Billboard 200. The fifth single from the album is “Drink on It” and in April 2012 it became hit No.1. He became the coach of the show The Voice. On December 6, 2011, her finalist Dia Frampton of season 1 released an album “Red” and recorded a track with Shelton titled “I Will”. In the second season, his finalist Jermaine Paul became the champion of the show. In Season 3 his team member Cassadee Pope was declared the winner. In February 2012, he took the stage with Miranda Lambert at Super Bowl XLVI. He released his Christmas album “Cheers, It’s Christmas” in October 2012.

On January 8, he released a new single “Sure Be Cool If You Did” on iTunes. The single successfully reached at No. 1 on the Billboard Hot Country Songs in 2013. On March 26, 2013, he released his eight studio album “Based on a True Story…”. In 2013, the second single from the album “Boys ‘Round Here” was released to country radio. He won the Gene Weed Special Achievement Award at the 48th Academy of Country Music Awards”. In season 4 of The Voice, he became the winning coach of team member Danielle Bradbery. On September 30, 2014, he released his ninth studio album “Bringing Back the Sunshine”. On October 23, 2015, he released his album “Reloaded: 20 #1 Hits”.

As of 2016, Blake Shelton’s net worth is estimated to be $75 million dollars.