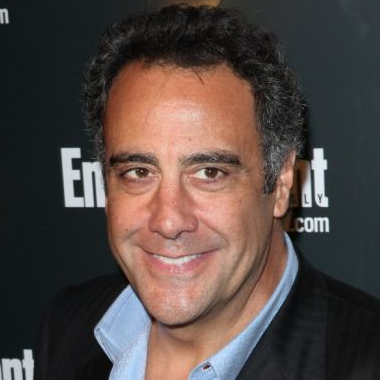 Brad Garrett, an American actor, stand-up comedian and voice actor have enriched the giant Hollywood industry in various aspects. Known for his deep booming voice and tall stature, Garrett has appeared in various tv shows and films, including “Underdog”, “Night at the Museum: Battle of the Smithsonian” and “Law & Order: Special Victims Unit”. He has also managed to earn fame as a professional poker player.

Father of two children, Brad Garrett was born on 14 April 1960 in Woodland Hills, California, US. His mother, Barbara was a homemaker, and father, Albert “Al” Gerstenfeld is a salesman working in geriatrics. Garrett follows Jewish with his two older brothers, Paul, and Jeff. Growing up with his parents he celebrates both Christmass and Hanukkah.

Garrett was educated at George Ellery Hale Middle School and graduated from El Camino Real High School, both in Woodland Hills. He attended UCLA for less than six weeks before dropping out to pursue a career as a stand-up comedian. He then began to start performing at various Los Angeles comedy bar and was later given the opportunity start at the Ice House in Pasadena and the Improv in Hollywood. Shortly, he rose to fame and became the first $100,000 grand champion winner in the comedy category of the TV show “Star Search” in 1984. He was the youngest comedian o ever perform on “The Tonight Show Starring Johnny Carson” at the age of 23. His appearance with Carson has boosted his fame and brought the national attention.

After receiving a huge success as a stand-up comedian, Garrett decided to change gears and started performing on TV. He voiced Hulk Hogan for the cartoon show “Hulk Hogan’s Rock ‘n Wrestling” from 1985 to 1986. He was then featured on “Family Feud” during Ray Combs’s  stint in a “Funny Men vs. Funny Women Week”. In 1987, he made an appearance on the game show “Super Password”. He was also featured on Hollywood Squares including a memorable moment when he impersonated Bill Cosby during a question about Jell-o. Later, he appeared in the short-lived CBS’ comedy “First Impressions” in 1988; in which he was a divorced father who makes a living doing impressions and from 1995-96 he appeared in NBC’s “The Pursuit of Happiness, where he was the hero’s gay best friend.

Prior to these roles, Garrett also had a minor part on “Transformers”, where he voiced Decepticon base Trypticon in season three and as an ill-fated thug in “Suicide Kings”. He was also a regular cast member of the long-running family-oriented comedy “Everybody Loves Raymond” as Ray Romano’s brother Robert Barone. Garrett has also appeared on “The Fresh Prince of Bel-Air”, portraying a hitman who attempts to kill Will Smith’s character.

His Career Continue To Cherish

In the fall of 2008, he starred in an online reality show called “Dating Brad Garrett”, where he was also the executive producer. Garrett hosted a celebrity roast of Cheech & Chong, which was aired on TBS in 2008.

In 2009, Garrett entered the main event at the World Series of Poker, losing on the second day of the event. Garrett has starred in commercials for 7-Up, where he portrays a more happy, cheerful version of himself due to the soda. In June 2010, he opened Brad Garrett’s Comedy Club at the Tropicana Resort ( ended on 12 December 2011) and Casino in Las Vegas, Nevada. In December 2010, he was one of the narrators during performances of the Candlelight Processional at Epcot.

In June 2011, a kid show called “I Kid with Brad Garrett”, was premiered on TLC. After he closed the Tropicana club, he opened a new club with the same name across the street at the MGM Grand, which active as of January 2017. In the fall of 2016, Garrett portrayed Frankenstein’s monster in a Christmas commercial for Apple’s iPhone.

In 2007, Garrett smacked a TMZ photographer’s camera, which the photographer claimed hit him in the face. The Los Angeles District Attorney declined to file assault charges against Garrett for the incident because the DA felt Garrett was provoked in the incident.

On 24 February 2008, Garrett was named the grand marshal for the Auto Club 500. He has an estimated net worth of $25 million dollars. He has earned most of his assets through his acting roles in films, television shows, and video appearances.

Garrett appeared on “Are You Smarter Than a 5th Grader?” and played for his charity, the Maximum Hope Foundation. He answered every single question correctly winning $25,000 and walked away with that after being asked to play for $250,000 with the bonus subject.

Brad Garrett proposed his then-girlfriend, Jill Diven, on the set of “Everybody Loves Raymond” in 1998. Garrett and Diven had an intimate wedding on May 18, 1999. Soon after their marriage, they have two children. The couple separated in 2005 and Diven filed for divorce in July 2006.

Brad Garrett is currently engaged to IsaBeall Quella. The couple has been together for over seven years before Brad proposed to IsaBeall on Dec. 27, 2015, in the Winston Churchill suite at New York’s Waldorf-Astoria as singer/songwriter Marc Cohn played the couples’ favorite songs on the piano. They are often seen together on various celebrities events and award ceremonies. Recently, both stepped out on the red carpet at the 2016 Emmy award.