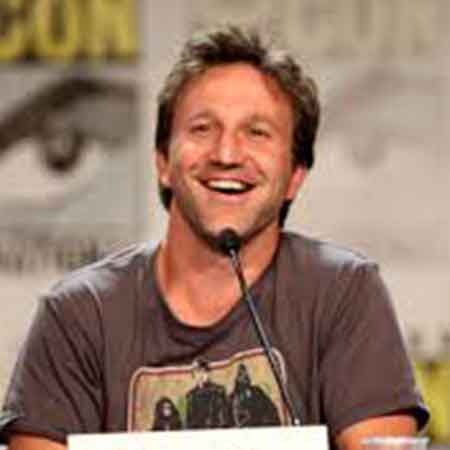 Breckin Meyer is an American actor, writer, producer, voice actor as well as drummer who is widely renowned for his roles in the films including, Road Trip, Rat Race, the Garfield, Clueless and so on. Besides, he won an Emmy for writing on the TV episode Robot Chicken: Star Wars.

Breckin Meyer was born on May 7, 1974, in Minneapolis, Minnesota, to Christopher William Meyer, father, and Dorothy Ann, mother. His father is a management consultant whereas his mother is a travel agent and former microbiologist.

He has a younger brother, Adam and an older brother, Frank.  His older brother is a staffer and producer of Fresh Ink Online at G4tv.com. Regarding his nationality, Meyer is an American and is of white ethnicity.

Meyer completed his elementary education with an American actress, author, director, model, and producer, Drew Barrymore. Afterward, he attended at the Beverly Hills High School. He was involved in acting since his early age. As a child, he was mostly seen in a television advertisement. With an intention of being an actor, he then decided to take his professional career as an actor.

Breckin Meyer made his film debut in 1991’s Freddy’s Dead: The Final Nightmare but his breakthrough role was the 1995 hit “Clueless” where he played a skateboarding stoner. Before that, he appeared in the television series, including, Potato Head Kids, The Wonder Years, Chicken Soup and so on.

Till the present context, Meyer has appeared in the multiple television series as well as films including Road Trip, The Craft, Escape from LA, Kate and Leopold”, Payback, 54, Can’t-Wait, Josie and the Pussycats, Garfield: The Movie, Herbie: Fully Load, Garfield: A Tale of Two Kitties, and Ghosts of Girlfriends Past, among other films.

Moreover, Meyer was also nominated for an Emmy for his writing on the “Star Wars” episode of “Robot Chicken”. He also the voiced for Joseph Gribble on “King of the Hill” and stars in Adult Swim‘s Titan Maximum.

Meyer also played drums with the punk band, The Street Walkin’ Cheetahs as well as with Rage Against the Machine guitarist Tom Morello‘s side project The Nightwatchman, and with Ben Harper, Cypress Hill, Slash and Perry Farrell.

More recently, Meyer has made appearances in the television series, Designated Survivor portraying a role of Trey Kirkman. Besides. He is now working on his upcoming movie which is yet to be announced.

Breckin Meyer married his girlfriend, Deborah Kaplan in 2011 who is an American screenwriter and film director. The couple is blessed with two children Clover Meyer, and Caitlin Willow Meyer. However, the couple got divorced after living together for almost 11-year ears.

After a divorce, Meyer has kept himself away from extramarital affairs. He has not engaged in any love affairs neither there is any news or rumors spread in the air.

As an established actor, Breckin Meyer has accumulated a decent sum of money. Till the present context, he has appeared in the multiple television series, as well as movies which have helped him to grow his net worth. As of 2018, his net worth is estimated at around $4 million.