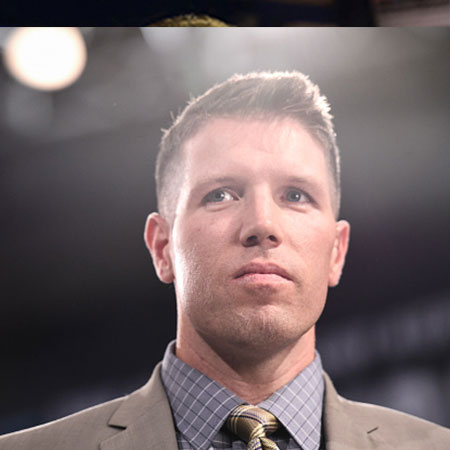 Brendan Fitzgerald is a studio host, who joined ESPN in August 2014 and has been hosting the shows such as SportsCenterU and College Football Daily.

Interest in the profession and Education

During his childhood days, he used to watch sports channel along with his dad. Brendan was intrigued towards the sports journalism profession when he came to realize that the folks talking about games earn money for speaking on-screen.

After realizing the charm of the profession, he decided to pursue a career as a sports anchor. Brendan joined Ithaca College in 2001 and graduated with Bachelors of Arts in Journalism in 2005.

Brendan started his professional life from KTVK-Belo, where he began to fill in as a sports producer/news writer in 2007. He spent a year at KTVK-Belo and moved to KCWY 13 in March 2008. Brenden then held the position of Sports Director at KCWY 13 for more than two years. In August 2010, he became Weekend Sports anchor and reporter at KGBT Action 4 News.

Similarly, Brendan joined Fox 25 News in August 2012 and worked as a sports anchor and reporter based in Greater Boston Area. Since August 2014, he has appeared on ESPN as a studio host.

Roles at ESPN, Honors, and Awards

Brendan has been anchoring various shows at ESPN such as SportCenterU and College Football Daily. Additionally, he has been hosting pre-game, halftime, and post-game shows for many live broadcasts of college football and college basketball games for ESPN.

Having worked in the field for over ten years, Brendan has received numerous awards such as Best Sports Anchor by the Wyoming Association of Broadcasters. Similarly, he also received an honor from Texas Associated Press for feature reporting.

Brendan is a fan of Boston Bruins, and he rarely misses their matches. He has especially admired their 2011’s Stanley Cup performance.

When it comes to his favorite sports moment, he was lucky enough to cover the Sox throughout the season in 2013 and was on the ground on ever ALCS and World Series game.

Brendan is a married person, and he is enjoying healthy conjugal life with his wife, Amy. The couple currently lives just outside Charlotte, North Carolina. More information on Brendan professional works can be found on his LinkedIn profile. Official website of ESPN has also posted details on his career path