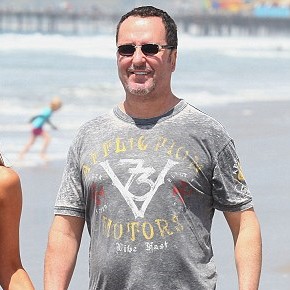 Jim Bellino is a Southern California entrepreneur and actor, who is best known for his appearance in Real Housewives of Orange County, an American reality television series.

Since 2005, Jim has been hitched to Alexis Bellino.The couple is blessed with three children, son James and twin daughters Melania and Mckenna. Besides their beautiful kids, the couple has also been looking after their multiple business ventures.

The couple launched their new venture called Sky Zone, trampoline park business in 2013. The couple has also been appearing in Real Housewives of Orange County since 2009.

Jim doesn’t wants his wife to appear on RHOC, but because of contractual obligations, the couple has been starring in the show. In an interview, when asked about his control over Alexi career, he stated that she comes to him for opinion, and he gives his perspective respecting her space to make her decision. He also mentioned in the interview that he wants to shield his wife from outside influences that wish to bring conflict into their family life.

As an entrepreneur, Controversy, and Reshaping His Image

Jim Bellino has put his hand in business in multiple sectors. During 1990’s, he reportedly owned a forensic document services venture that worked on identifying and authenticating famous autographs. He was later brought into the custody of FBI when it was connected his Orange County authentication firm certified forgeries produced by the Bullpen gang.

Having the ability to understand the situation immediately, Bellion decided not to take the issue to the court as it was sure that he would be vindicated if the matter went to legal process, according to the tabloids.

Award-winning Author Nelson writes in his book based on the story of forgery rings, Operation Bullpen,

“Feeling sure he would be vindicated if his case went to trial, he declined to take the matter to court, citing the high cost of litigation and the length of time involved. Instead, he accepted a deal with the government that gave him probation and expunged his record. He cannot, however, return to the memorabilia business without obtaining an order from the court.”

However, Jim has denied the forgery accusations. In his self-made bio, he has stated that

“If you ever read the official report, there is never any mention of me forging any item, let alone Mother Teresa’s name–this is a flat out lie.

In the 1990s, I started a memorabilia company called the Sports Gallery. Realizing that there was a need for authentication in such a tainted industry, I searched for the most qualified document examiner in the country and started Forensic Document Services.

My goal was to seek out the most qualified document examiner in the country. So, I hired a long time professional forensic document examiner that actually worked for the Department of Justice for the state of California and his name was Robert Proudy. Proudy’s reputation preceded him–he was well known from being the Chief Forensic Document Examiner in both the Patricia Hearst and Zodiac Killer cases.

Forensic Document Examiner Proudy’s job was to examine items that came to FDS. Proudy would examine the item, and write a report authenticating or denying authenticity based on his findings.

As proof that I was never included in any indictments or further investigations, please see full story by clicking on the OFFICIAL FBI REPORT OF OPERATION BULLPEN HERE“>

In the wake of removing his hand from the forensic document service business, he experimented with other diverse business such as a Mexican restaurant that was shut down in 2005 and AAA Wholesale Billiards, which he sold to RECTIVITY in 2005. He has likewise invested in a pawn shop and a house flipping business. Currently, along with his wife, he has been in the entertainment business, Sky Zone, a chain of indoor entertainment Centers in the United States and Canada.

Jim holds the degree of Associate of Practical Theology from the Christ For The Nations Institute.

Jim Bellino has more than 18K (2016) followers on Twitter, and around 15,00 (2016) likes on Facebook. In the recent days, he seems inactive on Facebook, whereas he has also kept twitting less frequently. Jim however has his official website, which he has been using to promote his business.