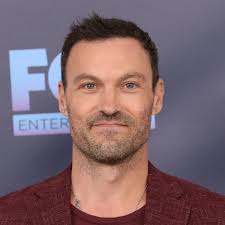 Born Brain Green, is popular for his role in the Beverly Hills, 90210. He can also be in TV movies such as Unwed Father, her Costly Affair and he has also made appearances in TV shows such as Sabrina, the Teenage Witch and The College Years.

He is married to the wife, Meghan Fox. Fox and Austin have three sons together. Brian has a fourth son with his former fiancée, Vanessa Marcil.

He had to later add a middle name Austin to differentiate him from another fellow actor for Screen Actor’s Guild.

Brain landed his first full-time job in TV when was selected as a cast for Knots Landing. He was beginning to attract attention from his role and then he got the role of David Silver in the TV teen drama Beverly Hills, 90210.

His character in the Beverly Hills was often scripted to match Brain’s own. His character was one of the most beloved and popular in the show.

Instagram: Brian with his cast members of Beverly Hills;

After his fame from Beverly Hills, he was cast in the critically acclaimed drama Resurrection Blvd. He has also made small appearances in Hope & Faith, Freddie, The Twilight Zone, Las Vegas and CSI.

His fame peaked after he was cast in the TV series Terminator:  The Sarah Chronicles, after his recurring role in the first season, he was then made a permanent cast member.

His guest role in the sitcom Anger Management broke the ratings of the show and was again invited to do another episode.

Green has been known to date his former co-star Tiffani Thiessen in 1990s. After his breakup from Tiffani, he then began dating Beverly Hills co-actor Vanessa Marcil. Brian got engaged to his girlfriend Vanessa in 2001 and they gave birth to their son Kassius in 2002. However, the couple called off their engagement.

When Brain was acting in Hope & Faith, he met Megan Fox in 2204. The actress was 18 at the time and Brian was 30, despite the vast age difference, they began to date and announced their engagement in February 2006.

But in 2009 they announced that they had broken off their engagement only to declare that they were engaged again in 2010.

In 2015, it was reported that Fox had filed for divorce but in early 2016 they got together again. Megan and Brian begot their first son in 2012, Noah Shannon Green and in 2014 they had their second son Bodhi Ransom Green. Fox’s third but Brain’s fourth son was born in 2016 named Journey River Green.

Brian has made several statements regarding his invasion of privacy from paparazzi. He is recorded saying “…They follow me in cars when I pick him (his son) up from school, that’s really crossing the line. I understand that they want shots of me with Megan, but we’re pretty boring. They won’t catch us out at clubs, getting drunk or being hauled in for DUIs. All they usually get is pictures of us leaving Staples or Target, or walking into a restaurant.”

He is also known to make bold statements to the critics who said that his son shouldn’t wear dresses.

Instagram: Brain in a vacation, hotel in which he was staying;

Brian is known to spend a lot of vacations with his family in various places.