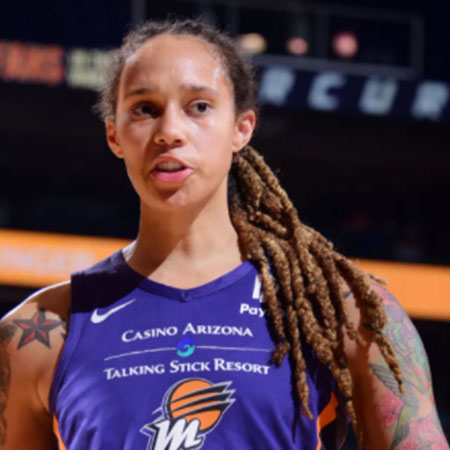 Brittney Griner is an American Basketball player, who is currently playing for Phoenix Mercury in the Women’s National Basketball Association (WNBA).

Born on October 18, 1990, as a daughter of Raymond and Sandra Griner, Brittney grew up along with her three older Siblings. She was born in Huston Texas and completed her high school education from Nimitz High School in Huston

She started to play basketball since her high school days and also played volleyball for the short period. During her high school career, she gave a sensational and record-breaking performance with 52 dunks in 32 games. She also made a record of the highest number of blocks by a female in a high school game in the US, blocking 25 shots in a game against Houston Alief Hastings.

After enjoying magnificent high school career, she played collegiate level basketball from Baylor University, Texas. At the Baylor, she continued to be a record-breaking shot blocker, blocking 223 shots in a season. Similarly, she pitched two dunks in a single game. With that, she happened to be the only second women to dunk twice in a single match.

With the record-breaking performance, she received an induction to AP Second Team All-American and The 2012 Premier Player of Women’s College Basketball.

During her college career, she helped Baylor University to win Division I Women’s Basketball Championship, defeating Notre Dame in final.

She started her professional career at Phoenix Mercury after Mercury picked her during the 2013 WNBA Draft. She had the remarkable debut with Phoenix, as she equaled the WNBA dunk record with two dunks in a game against Chicago. She also became the first WNBA player to dunk in a playoff match against Los Angeles Sparks. Likewise, she helped Mercury to clinch the 2014 WNBA Final.

As a prominent member of the USA National team, Griner received training from the coach Geno Auriemma during the team’s Europe training tour.  She concluded her Europe tour with average 12.8 points and 7.3 rebounds.

She had her name in National Team for 2012 Olympics. In the Olympic team, she was the youngest player at the age of 22 when the average age of the team was 30. But due to her family illness and her studies, she did not participate.

She referred herself as a Lesbian in an interview with SI.Com on April 2013.

“It’s hard. Just being picked on for being different. Just being bigger, my sexuality, everything.”

Having bitter experience of being bullied during her childhood days, she is currently working against LGBT people and discouraging bullying.

Police arrested Griner on April 22, 2015, after she had a fight with her partner Glory Johnson, a WNBA player.

The couple had announced their engagement on August 2014. The cold war between the two WNBA players started after Johnson announced that she was pregnant without Griner’s biological link to the baby. Responding to the situation, WNBA restricted both players for seven games and sent Griner to complete 26 weeks of domestic violence counseling.