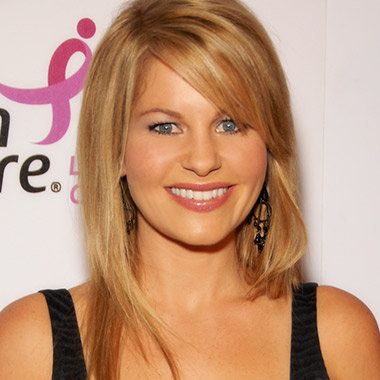 Candace Helaine Cameron Bure is a famous name in Hollywood who has gained name and fame as actress, producer, author and talk show panelist. She is often known as Cameron-Bure. Her role on Full House, where she played role of D.J. made her popular in public. Having charming smile and pretty face, Cameron has been able to show her strong presence in Hollywood. She participated on Dancing with the Stars Season 18, where she was placed in third place. She has made her appearance on Make It or Break It, where she played role of Summer Van Horne.

Taking about her early life, Candace Cameron-Bure was born on April 6, 1976 in Panorama City, Los Angeles. She was born as youngest daughter and has three elder sisters. One of her sister is former Growing Pains star Kirk Cameron. Similarly she is also sister-in law of Chelsea Noble. Bure completed her school education from one of the well known school of her home town along with her sisters.

“I figure this is my time – to relax, be with my family and have a normal life.”

Moving to her career life, Candace Cameron's older brother Kirk was a actor. Being a sister of Kirk, it was easy for Bure to follow footsteps of her brother. She began her career in entertainment business after appearing in a number of television advertisements. Later she appeared as guest artist in various shows such as St. Elsewhere, Growing Pains and Who’s the Boss?. In 1985 she played role of a girl, Jennifer Bates, in the sitcom Punky Brewster. The role she played was a girl who had been kidnapped by her father. Similarly she appeared on the role of the youngest sister Eric Stoltz in the sitcom Some Kind of Wonderful.

Bure career took next level when she got role of a Donna Jo, D.J on the ensemble sitcom Full House. She was associated with Full House for 8 years and this long-running series broadcasted its last episode in 1995. While working on Full House, she had also made her appearance in the No One Would Tell where she played role of an abused teen. She also made guest appearance in the failed pilot Real Mature and in Bill Nye The Science Guy’s one episode, where she played role of Canadace the science girl. She has also experience of working in feature film such as Punchline . She has also hosted various events including Nickelodeon Kids’ Choice Awards in 1990.After Full House, she made her appearance in various sitcom and serues s such as That’s So Raven, Make It or Break It andI love the 80’s Strikes Back.

Digging about her personal life, Candace Cameron-Bure is currently married with Valeri Bure with whom she tied knot in 1996, Her husband is Russian NHL hockey player. They have three children including two sons, Lev and Maksim and a daughter Natasha. Bure seems to have worked on maintaining her body shape. She has height of 5’2’