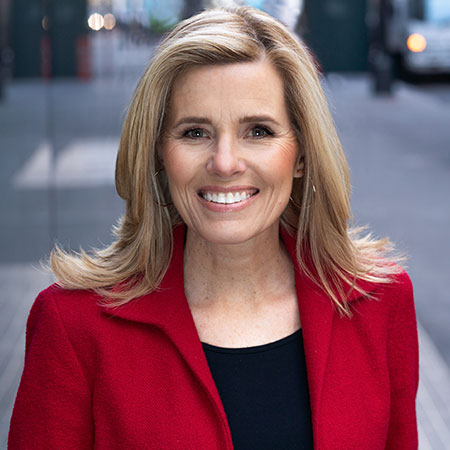 Kelly Jean Wallace, frequently known as Kelly Wallace, has made her identity as an American journalist, reporter and presenter who has been serving CNN for several years. Before beginning her tenure in CNN she had experience of working in CBS Evening News and iVillage. She is one of the gorgeous and bold personality working in CNN and considered as the beauty with brain. Having years of experience in field of journalism she is one of the experienced reporter and journalist of CNN.

Talking about her early life, Kelly Wallace was born on December 21, 1966. Born and raised in Sheepshead Bay, Brooklyn, New York, she completed her high school education in 1983 from one of the well known school of her home town Sheepshead Bay High School. After completing her high school education she got into one of the prestigious college of U.S., Wharton School of Business, from where she earned Bachelor of Science degree in Economics.

“The mini-me phenomenon is, you know, I dress a certain way, my kid is sort of an extension of me and you know, our tastes are the same or I want the kid to dress as I dress.”

Kelly Wallace started her career from CNN in 1990, when she started to work as a producer. Later on she moved to KRQE in New Mexico where spent three years of her career. After working three years in New Mexico, she got offer from Fox News and went to work went back to New York accepting the offer. In 200, Wallance returned to CNN and worked their before she departed to CBS News in 2007. Later on she became Chief Correspondent and Executive Director of Digital Video for iVillage. Wallance supports feminism and has been focusing on various women’s related issues. She mainly focuses on the power of women and right of women.

During her tenure in iVillage, Kelly Wallace got chance to interview various elite personality such as first US lady Michelle Obama, secretary of Health & Human Services Kathleen Sebelius and Musician and singer Alicia Keys. Similarly she also interviewed Jill Baden, Gabby Douglas, Michele Tafoya and Tamron Hall. She made her frequent appearance on various media such as Today, MSNBC Jansing & Co. She also has experience of working at some popular networks such as Fox News Channel, CNN and CBS. Currently she appears as an anchor, reporter and presenter at CNN. Wallance was recipient of the 2012 Gracie Award for Outstanding Reporter/Correspondent for her contribution in covering various news and event from around the globe.

Talking about her personal life, Kelly Wallace is currently married with Rachel Maddow Show with whom she had been in relationship for several years before tying knot. Her husband Maddow currently serves Bloomber Television as an executive producer and he also has experience of working as producer in MSNBC. The couple has two daughters Hattie and Lily and living happily in the Upper West Side of Manhattan in New York City. Wallance has net worth of $6million (2016).