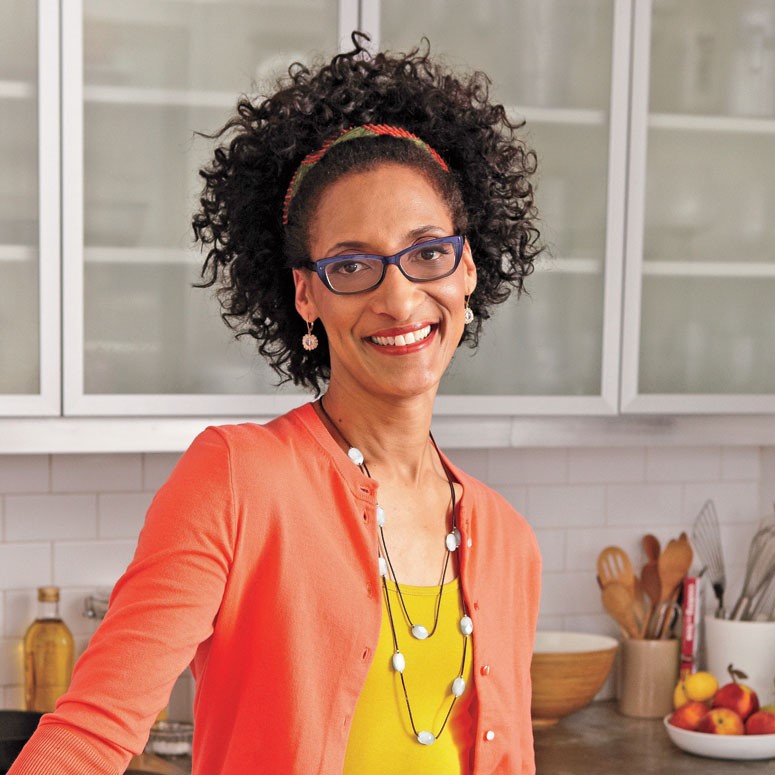 Carla Hall is an American former model, author, television personality, and chef, well known as a competitor on Bravo’s Top Chef. Currently, she is the co-hosts on “The Chew,” a one-hour talk show focused on food.

Carla Hall is happily married to her boyfriend, Matthew Lyons, a lawyer, and photographer in 2006. The couple is blessed with a son and living together happily.

Carla Hall was born on 12th May 1964, in Nashville, Tennessee. Her mother’s name is Audrey Hall. She grew up with her sister, Kimberly Hall. Carla attended Howard University’s business school in Washington, D.C., receiving her degree in accounting and later working for a time at Price Waterhouse, becoming a CPA.

Then, she worked at Price Waterhouse for two years to obtain a CPA certificate. After receiving the CPA certificate, she turned her focus and started to work as a model.

Carla Hall filled several years of her career in the modeling sector starting from 1988. She appeared as a model on the runways of Milan, Paris, and London. It was the time when Hall started to develop her passion for cooking. She was also motivated by how her Grandma Thelma crafted meals well into her later years.

Carla Hall started her chef career as a lunch delivery service the Lunch Bunch where she served there around four years. Then, she attended L’Academie de Cuisine in Gaithersburg, Maryland and graduated with a Culinary Career Training certificate.

I’m recreating my wedding cake, and banana pudding is my inspiration. What?! @thechew pic.twitter.com/fm6C29o9sE

Then, she did an externship at the Henley Park Hotel in 1996, where she was then encouraged to sous chef. At the same year, she worked as the executive chef at the State Plaza and the Washington Club.

After gaining much of the knowledge and experience in the food sector, Carla Hall began her own catering company Alchemy Caterers which is resided in Silver Spring, Maryland. Later, she renamed the company by her own name Carla Hall Caterers.

Her catchy phrase “Hootie Hoo!” started to represent her. She also began to acquire a title for her philosophy “Cooking with Love” in the show. On the eighth season, she was the member of the cast of “Top Chef: All-Stars.”

She finished in the fifth position in the competition winning “Fan Favorite” title. Since 2011, she is one of the five co-hosts of the TV show “The Chew.” In 2009, she featured on the cover of the Washington Post Magazine on “Fit for Frame”.

As an author, she has penned two cookbooks, “Cooking with Love: Comfort Food that Hugs You” (2012) and “Carla’s Comfort Foods: Favorite Dishes from Around the World,” (2014).

It proves her cooking philosophy that is “Love for Cooking and Family.”

She is a happily married woman. She got married to her boyfriend, Matthew Lyons, lawyer, and photographer in 2006. Their wedding was simple and among an intimate group of around 50 people.

The couple met throughout an online dating service, “Match.com.” She also shared that Matthew Lyons was the first man she went out with and her first boyfriend. Carla Hall must be one lucky lady to have got the jackpot on the first try.

They have not any children together, but she does have a stepson named Noah. She is very keen on her body and health and along with her husband practices Bikram yoga five times a week. In fact, her husband assists her. Carla Hall holds an American citizen and belongs to African-American ethnicity.

The Chew star has a very inspirational and successful job. Carla Hall earns an attractive sum of salary from her different profession. Being engaged in several professions, a formal model, author, TV personality, Chef, Carla has several sources of income.

Allocating information from several sources as of 2018 it is found out that Carla Chef current estimated net worth is around $2.5 million. Carla Hall is active on social networking sites, where she has a huge fan following, mainly who want to try out her recipes and also want to know more about her.