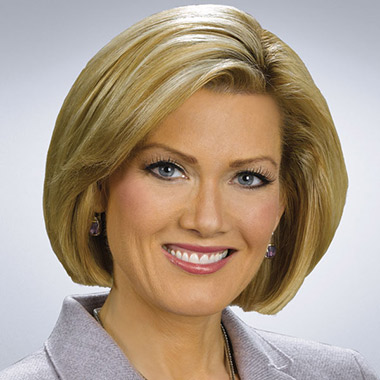 Cecily Tynan is a renowned media personality who has warmed the broadcasting world with her unique style of presenting. She is the 5, 6 and 11 pm weathercaster on WPVI-TV. She also hosts the Saturday evening public affairs show called ‘Primetime Weekend’, since the death of her co-host Gary Papa on 19 June 2009.

Currently fifty years old, Cecily Tynan is married and shares two children with her second/present husband, Greg Watson. Furthermore, her net worth is $2 million in 2019 with an estimated annual salary over the six digit figure.

Tynan has an estimated net worth over $2 million in 2019. Currently, working for WPVI-TV, her annual salary is estimated no less than the six digit figure.

Cecily Tynan has married twice in her life. She first tied the knot with boyfriend, Michale Badger, an educator. After staying together for years, she divorced with her first husband, due to personal matters.

#TBT to 3 years ago on the beach in @turksandcaicos Love that place! @BeachesResorts pic.twitter.com/V7yxXvomYo

Then, Tynan married Greg Watson. They are still together with their two children: Luke and Emma.

Cecily Tynan was born as Cecily Joan Tynan on 19 March 1969, in Newton, Connecticut, USA. As per nationality, she is an American and belongs to the white ethnic background. Her star sign is Pisces.

Cecily Tynan started her broadcasting career from WDBJ in Roanoke, Virginia. She briefly worked as a weekend weather anchor and a general assignment reporter for WDBJ. She later moved to Las Vegas, Nevada and worked for KTNV’s ‘Good Morning Las Vegas’ as a news anchor as well as its weathercaster.

Cecily Tynan began her career at WPVI-Tv since 1995, where she was hired as a weekend weathercaster and general assignment reporter. Later, she was assigned to anchor the weekday morning weathercasts. In 2003, she became the networks’ weeknight weathercaster at 5:30 and 11 p.m after Dave Roberts resigned.

She replaced Lisa Thomas-Laury and hosted various local productions shows such as 6 ABC Boscov’s Thanksgiving Day Parade, Philly on Wheels, the Flower Show and the 4th of July Parade. Due to her hard work and dedications, WPVI promoted Tynan as the network’s chief weathercaster/meteorologist in late 2009 after the retirement of Dave Roberts.

Apart from her journalism career, Cecily Tynan is an exceptional athlete and is a triathlete. She has performed in a various marathon race and was featured on the cover of Runner’s World magazine in February 2011. In 2012, Tynan was inducted into the Hall of Fame by The Broadcast Pioneers of Philadelphia.