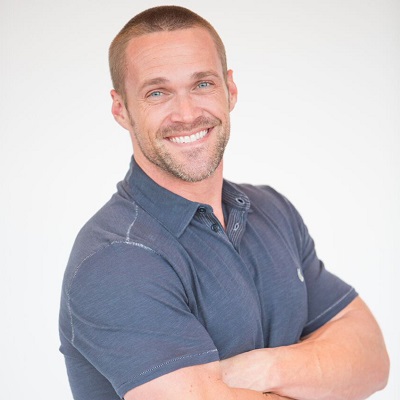 Chris Powell is an American personal trainer, as well as reality show personality. Moreover, he is also a talk show host and an author. Powell is best known for his show called Extreme Weight Loss on the ABC television. The show was formally known as Extreme Makeover: Weight Loss Edition.

As we know obesity is one of the most widespread problems in the modern world it is no doubt that his show is a huge hit and a transformation camp as well. So let’s know all about Chris Powell here.

Chris Powell was born on 2nd March 1978, in Phoenix, Arizona, United States. Although being a famous person, there is no any information about his parents and siblings. But in several interviews, he has said that he attended the local school for his early education and his parents encouraged him for weightlifting during his childhood.

While heidi and the kiddos say this haircut makes me more ‘current’, I have used more hairspray in the last 2 weeks than I have in the last 15 years. Ah…the shaved head days were so much easier… But I might as well style it while I’ve still got it

Powell completed his graduation from  Arizona State University with a degree in Exercise Science, with concentrations in biomechanics and physiology.

I want to take a moment to give a shout out to Brute Strength. Not only are they great friends, but they’re some of the greatest coaches the sports and performance industry has ever seen, specializing in everything from weightlifting to gymnastics, powerlifting to bodybuilding, endurance to competition prep. ‍♀️ . I have followed their programming for years now, as they helped me prepare for a handful of CrossFit competitions. I can’t say enough for this crew of professionals – that’s why we came to them first to help create the Cross Training programming in @theTRANSFORMapp! . They’ve got a new program starting this Monday called Brute Body. Just google it It’s a combination of Body Sculpting and CrossFit, and it is SOLID. . And no, I’m not being paid for this. They are legitimately phenomenal coaches – highly educated and experienced – I appreciate their passion for helping people achieve their greatest potential, and wholeheartedly believe in their programming and approach. If you are looking to take your training to another level, I trust them. If anything give them a follow at @brute.strength for some awesome training tips and tricks. Keep up the great work, and keep making human machines, guys! @michaelcazayoux @brucebarbell @hinshaw363 @adrianconway_ @jacobhutton1

Besides this, he is also an author of two books called Choose to Lose: The 7-Day Carb Cycle Solution and Chris Powell’s Choose More Lose More for Life. Furthermore, he has also made his appearance in the Oprah Winfrey Show and 20/20. He is one of the talented hosts who made his appearances in many programs like The View and in a one-hour documentary that aired on TLC.

Flashback to a year ago when I competed in the Crossfit East Coast Championships with the one and only @tommyhacksaw. When Tommy asks you to be on his team, you don’t say ‘no’ . This pic was taken at the very beginning of the longest and most excruciating 2 minutes of my life. LOL Thank goodness for my training…I survived and had a blast!! @brute.strength #brutestrength #transform #crosstraining

In 2008, Powell and his partner David Smith co-founded the Web-based weight-loss program called ReshapeTheNation.com. They provide the fitness guidance to people online. Besides this, he has also made his contributions on Good Morning Arizona and Good Morning America. These days he runs his own fitness series called “Meet the Powell Pack.”

Chris Powell is a happily married man and lives a beautiful family life. He is married to his beloved wife Heidi Powell.

This couple has two daughters Marley and Ruby Lane and two sons Cash and Matix. Which makes him a family man living in a family of six. This power couple is happily maintaining the family life for a long time and proves monogamy is still possible in this 21st century.

Our happy place ☺️ Me and Heidi had the honor of taking over the @fsscottsdale insta today…with the rest of the PowellPack of course Hope y’all had fun with Heidi’s stories of our shenanigans and the posts today! #Repost @fsscottsdale ・・・ Happy #GlobalWellnessDay!! @realheidipowell and @realchrispowell here. To celebrate, we are taking over @fsscottsdale…Powell Pack style! Four kids, lots of swimsuits, tons of good food, and even more fun to be had. Follow along with us today as we enjoy some family time at hands down the best resort in AZ. #FSWellness

We assure you that there is less chance of having a divorce. Besides this, there are no any records of his other relationships and extramarital affairs so far. Powell’s nationality is American and belongs to the white ethnic group.

Being such a famous person, Chris Powell must have a good net worth, isn’t it? Allocating information from several sources as of 2018, it is found out that his current net worth is estimated to be around $8 million.

So, we hope you got to know some personal side of Chris’s life and we do hope you enjoyed reading about him. For more inspiring biographies, stay with Dodoodad.