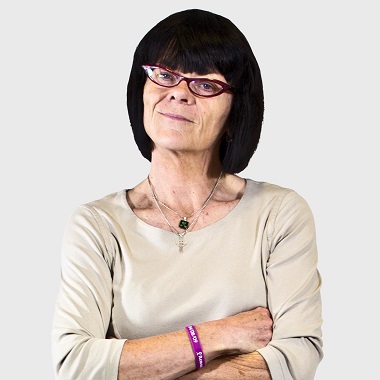 Christie got married to Jim Otto. However, the couple ended their marriage relationship. After her divorce, she never starts a romance in her life. She is reportedly single and unmarried.

Christie Blatchford was born on 20th May 1951, in Rouyn-Noranda, Quebec Canada. She along with her family moved to Toronto, while she was in grade 11. Blatchford enrolled North Toronto Collegiate Institute and graduated from there in 1970.

She then studied journalism at Ryerson University. Her grandfather and her uncle were a journalist and though Blatchford was not seriously conscious of that when she was a teenager. During her early age, she was keenly interested in writing.

When she was 15, she had her newspaper that Blatchford gave out at the hockey rink where she worked. She did not even know it was journalism; she just knew that Blatchford wanted to do and ran it on a copy machine, where she wrote everything on it.

She began her career at the Globe and Mail. She was going to school, she was in her second year of journalism, and they were looking for copy editors, so she applied and hired them and paid them. So she worked there part-time as a copy editor, then when she finished school she went to a full-time job as a reporter.

By the third year, she was writing columns occasionally for the Globe. She was the sports columnist for the Globe and Mail from 1973 through 1977. It involved a lot of travel; she was away for half of the year. She covered sports in Canada and the U.S. She was one of six women in North America who has done that.

She was tired, so she changed jobs, and went to the Toronto Star, where she worked as a feature writer from 1977 to 1982. Blatchford later worked at the Toronto Sun, where she stayed for almost 20 years, writing in such positions as lifestyle columnist and city columnist.

She began to write for the “NATIONAL POST” in 1998 and received the National Newspaper Award for column writing in 1999. But she left the station to join ‘The Globe and Mail.’

Christie The Globe and Mail Career

In 2003, she joined “The Globe and Mail” in 2003 as a columnist and served there for eight years. She then returned once again to the National Post in 2011. She is considered a conservative writer whose views over the years have prompted strong reactions and media responses. In 2006 she spent half a year in Afghanistan as an embedded journalist with Canada’s military.

Christie’s first book named “Spectator Sports ” was published in 1986, which was a bunch of comic reflections on life, love, current events and developing up in ‘Rouyn-Noranda.’ In 1988 she wrote a similar book of essays, “Close Encounters.”

Her third book, ‘Fifteen Days: Stories of Bravery, Friendship, Life and Death from Inside the New Canadian Army’ was published in 2008 and won the 2008 GOVERNOR GENERAL’S LITERARY AWARD for Non-Fiction.

The book focuses on 15 important days in the Canadian armed forced time in Afghanistan where used time is getting to appreciate the soldiers and their families while investigating the book, which centers on parts of the ‘Princess Patricia’s Canadian Light Infantry.’

Her fourth book ‘Helpless: Caledonia’s Nightmare of Fear and Anarchy, and How the Law Failed All of Us was written in 2010.

She was surrounded by controversy and accusations of racism against aboriginal people. The book condemns the inaction of the government and police forces during land disputes between the residents of the Six Nations of the Grand River and growth near Caledonia, Ontario, completing in the blockades of 2006.

Blatchford commiserates with the non-Aboriginals included in the dispute, while not providing a voice for the Aboriginal people involved. Both critics and supporters of Blatchford’s work suggest she did not focus strongly on the historical context of the conflict and, as a result, does not provide readers with the complete story in Helpless.

The controversial star got married to Jim Otto. However, the couple ended their marriage relationship. After her divorce, she never starts a romance in her life. She is reportedly single and unmarried. She always seemed to focus on her career and kept personal life away from media.

In 1999 Christie Blatchford became the winner of National Newspaper Award for her columns. Besides her newspaper work and her book publications, she is also a radio commentator for ‘CFRB’ Toronto and ‘CJAD Montreal.’

In 1999 Christie Blatchford became the winner of National Newspaper Award for her columns. Besides her newspaper work and her book publications, she is also a radio commentator for ‘CFRB’ Toronto and ‘CJAD Montreal.’She is a dog lover and posted her social sites.

Christie is one of the successful media personality and has contributed more than a decade in the working in the press sector. Her works from the media helping gain massive recognition and economic success. She surely earns an attractive salary. Allocating information from several sources as of 2018 it is found out that Christie Blatchford current estimated net worth is around a million dollar.