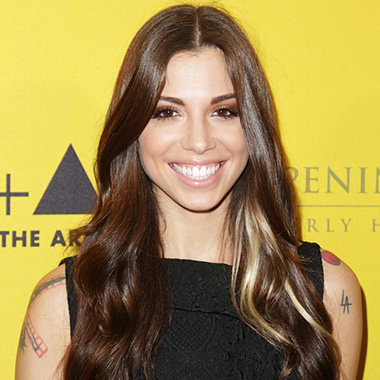 Christina Judith Perri, famous as Christina Perri, is an American-born singer and songwriter who has been active in the industry since 2010. Born on August 19, 1986, Perri recorded her debut single “jar of Hearts” in 2010 and it was featured on the show So You Think You Can Dance. She came in limelight when her single was sold over 3 million copies in the U.S. and reached the top of various Charts. After her first success single, she signed a contract with Atlantic records. She released her debut album Loverstrong in May 2011.

Born in Bensalem, Pennsylvania as a daughter to Mary and Dante Perri, Christina Perri grew up along with her older brother Nick Perri. Her brother Nick was a guitar player. Perri started to play guitar at the age of sixteen by watching a videotape of Shannon Hoon performing on VH1. In her early days, she used to sing and act in musical theater which later helped her to face an audience without being nervous. Being ardent music lover, she also learned to play piano and started to sing along with Piano.

“My earliest memories as a child are listening to Beatles records, and they are a big part of how I've learned to write pop songs.”

To be in the position Christina Perri struggled with many ups and downs. She traveled to Los Angeles for her 21st birthday and cried a lot being 3000 miles away from her family. She started to produce music videos to survive. She separated from her husband 18 months later and started live in a small apartment on her own and gave full time to the music. Perri’s hit “Jar of Hearts” was written when she moved back to Philadelphia at the end of 2009. Later, she moved back to L.A and started to work as a waitress during the day and recording at the night.

In July 2011, Christina Perri began her first world tour named the Lovestrong Tour. She traveled various countries and performed in 71 dates. Perri’s single “A Thousand Years” was picked as a soundtrack of ‘The Twilight Saga: Breaking Dawn – Part 1 and the song reached No.31 on the Billboard Hot 100. In 2012, she appeared as an opening act of Jason Mraz’s tour “Love is Four Letter Word Tour”. She released her debut album Lovestrong on May 10, 2011, and her second album Head or Heart was released on April 1, 2014. Perri has been awarded the BMI Pop Awards for her song “A Thousand Years” during 61st annual BIM Pop Awards.

Christina Perri dated Chandler Parsons in 2014, their relationship didn’t go well for a long time and the couple separated in 2015. She has also been linked up with another man Anderson and the rumor has emerged since 2014 that she is in a relationship with her guitarist John Hanson yet it has not been confirmed. Perri has an hourglass shaped body and she stand tall with a height of 5’6’’.  She has estimated net worth of $4million (2016). She is active in all social networking sites such as facebook, twitter and Instagram and her videos can be found easily on YouTube.