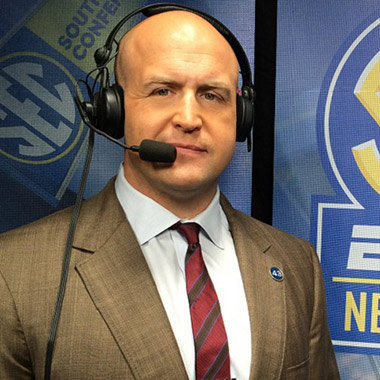 Many players could not keep themselves far from the sports even after they announce their retirement and they prefer to work as a commentator, analyst, and host so as to keep themselves close to their sport. Cole Cubelic is a famous TV personality who has been serving ESPN as a college football analyst. He is also popularly known as a former Auburn University offensive lineman and captain. He is considered as one of the skilled offensive linemen of Auburn University. After retiring from playing career, he could not apart himself from football so he started to work being close to the Football. He has been working for ESPN since 2011 and he currently works as an analyst on SEC network and ESPN3 telecasts. He has also been a weekly guest on the Paul Finebaum Show.

Moving to his early life, Cole Cubelic was born in Homewood, Alabama, United States. Besides birthplace, there is not much more information about his childhood memories. He completed high school education from one of the well-known schools of his hometown Homewood High School in 1996. Having an interest in journalism, he decided to pursue a career in journalism and joined Auburn University in 1996. He graduated from Auburn University in 2001 with Bachelor’s degree in Communication and Media Studies.

After graduation, Cole Cubelic immediately started to work as a Sales representative at Sanford where he worked from November 2001 to March 2003. He also worked in the same position in two organizations such as K&W Associates and Stryker in between March 2003 and December 2010. In January 2010, after having experience of 10 years working as Sales Representatives, he started work as Radio Personality in WZZN. At WZZN he co-hosted “Cubelic & the Kid and “Monday Night Blast off” on 97.7 FM. In July 2010, he became media personality of WZZN and worked on the position for three years before he started his own Men’s clothing business in 2012. He has also been working as client director since August 2013 in Container Solutions Inc.

Cole Cubelic joined ESPN in 2011 and started to work as an analyst. He has been reporting the SEC. He has also covered Sun Belt Conference football games. He has been working at AL.com as a sports analyst where he is responsible for providing analysis and film room explanations focusing on the offensive and defensive lines. He has also hosted the show “The Cube Show”  on 730 AM-WUMP. From 2009-2013 he worked for Sun Belt Network.