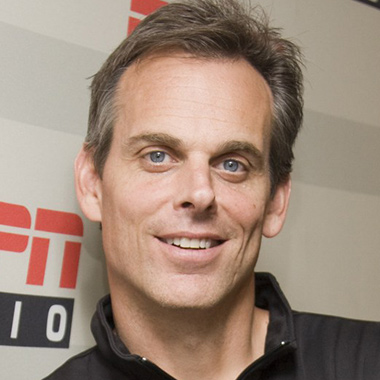 Colin Cowherd is an American television and radio sportscaster, who had anchored the sports-related news for various stations including KVBC, ESPN, SportsNation, Fox Sports, and much more.

Firstly, Colin Cowherd married Kimberly Ana Vadala but their relationship ended in 2007, after having two children. Afterward, Colin married Ann Cowherd. Currently, Colin is the father of six children, two are his own and four are his stepchildren.

Colin Cowherd was born on 6th January 1964, in Bay Center, Washington,  USA, to optometrist father Charles Cowherd and housewife mother Patrica. Colin Cowher’s childhood was not so well driver as he has to go through many obstacles and described his childhood “dark and idyllic.”

His parents divorced when he was young age and he was raised by his British mother in Grayland, Washington. His father, Charles remarried five times while his mother had to go through three divorces. Which he later jokingly described himself as “a child of divorces.”

Although, he has an elder sister Marlene, the fiscally conservative and socially liberal Cowherd spends a lonely childhood as her sister was not close to him. Being an isolated kid, he used to listen to baseball games on the radio sitting on the roof of the house and developed a keen interest in baseball, which he sometimes played all alone in the courtyard.

Colin Cowherd attended and graduated from Eastern Washington University. Soon after graduation, he moved to Tampa in 1996 and started his first career as a teacher. He worked as a trigonometry teacher at a local high school while serving the KGW-TV as a sports anchor.

Later, he decided to get more serious about anchoring work and left the school after working for two years. Cowherd started radio hosting as the play-by-play voice for Pacific Coast League’s Las Vegas Stars.

His unique way of hosting has earned him good reviews and was named “SportsCaster of the Year” for five times. This has led him to reach the next level and was hired by KVBC-TV as a sports director in Las Vegas, Nevada.

Despite his bad childhood, Cowherd went on shining in the world of sports. In 2003, he was assigned to take the place of Tony Kornheiser for the 10 a.m show on ESPN Radio. He is famous as the host of the popular syndicated show “The Herd with Colin Cowherd” on ESPNU and ESPN Radio.

The show features commentary on sports news, perspectives of other news stories, and interviewing popular sports figure and analysts were added as a simulcast on ESPNU. Demographic and regional preferences are the topics which he loves including frequently in his program.

National Football League (NFL) and college football along with the recent news from the Major League Baseball (MLB), and the National Basketball Association (NBA) are the topics majority of his conservation centered.

Cowherd has mentioned that he loved doing the radio shows more than the TV shows and wants to focus on radio work in the future. ESPN Sunday morning pro and college football talk show, Colin’s New Football Show, which Collins has started hosting from 2013.

During one of his show, Collin has stated that has been writing a book on- and- off for more than a  year. “You Herd Me! I Will Say It If Nobody Else Will”, is the name of the book which Colin has stated on his Radio show and the book was published in 2003.

In 2015, Colin Cowherd departed from ESPN following his contract expiration date and joined Fox Sports. Here, he moved his show The Herd program to Premiere Networks and Fox Sports Radio, which include in his contract.

For the TV shows, he got a recurring spot at Fox Sports 1, where he was a co-host with Kristie Leahy. In addition, he also contributed to other media such as the Fox NFL Kickoff,  “All Takes Matter” with Jason Whitlock and other commentary shows.

In 2005, he was awarded Radio Personality of the Year by Sports Illustrated. National Sportscasters and Sportswriter Association have voted him as Nevada’s “Sportscasters of the Year for five Years.” For his exact sports predictions, he was given the name Best Pundit by Pundit Tracker in 2012.

Colin Cowherd married Kimberly Ana Vadala in 1996. But ended their relation of being wife and husband with a divorce in 2007, after having two children. Colin then married Ann Cowherd in the presence of their close relatives in 2010.

According to different sources, Colin Cowherd’s annual salary is around $2 million. Allocating information from several sources as of 2018 it is found out that his current net worth is estimated to be around $14 million.