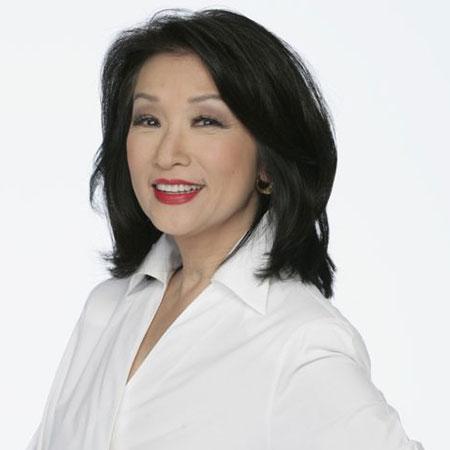 Connie Chung is an American journalist. She has worked for many U.S. television news networks CNN, CBS, MSNBC, NBC, and ABC.

Connie was born on August 20, 1946, in Washington, D.C., U.S. her birth name is Constance Yu-Hwa Chung Povich. Her father name is William Ling Chung. He was an intelligence officer in the Chinese Nationalist Government. She is the youngest of ten children from her siblings.

She attended Montgomery Blair High School and graduated from there. She then attended the University of Maryland, College Park and in 1969 she received a degree in journalism.

In early 1970, she worked for the CBS Evening News with Walter Cronkite as a correspondent. She left the job to work at the Los Angeles CBS affiliate KNXT. It was the nation’s second largest. She also worked as the anchor of the CBS Newsbriefs. She then started working in a new program created by NBC, NBC News at Sunrise. With Roger Mudd, she co-hosted American Almanac. She then left NBC and started working for CBS. She began hosting Saturday Night with Connie Chung.

She became the second woman to co-anchor a major network’s national news broadcast on June 1, 1993. She also hosted Eye to Eye with Connie Chung on CBS. In 1995 the program ended. She started working for ABC News. She there co-hosted 20/20 with Charles Gibson. Some of her famous interviews subjects include U.S. Representative Gary Condit and Claus von Bulow. She became the first journalist to interview Earvin “Magic” Johnson. She became the judge of 2011 Miss Universe contest. She was a guest host of Good Morning America. She then started working on her own show titled Connie Chung Tonight. She was paid $2 million per year.

When the 2003 Iraq War began, her show was suspended. She interviewed tennis legend Martina Navratilova in July 2002. Martina was criticized of U.S. political system. Martina was suggested to go back to Czechoslovakia by Chung. With Maury Povich, she started hosting a show called Weekends with Maury and Connie on MSNBC in January 2006. Since 2003 it was her first appearance as a television host. On June 17, 2006, the show was canceled. Jay Leno interviewed Chung on The Tonight Show on June 27, 2006. She also worked at the John F. Kennedy School of Government at Harvard University as a teacher.

Since 1984 she is married to Maury Povich. Maury is a talk show host. After her marriage, she got converted to Judaism. In 1991, she was in the hope of getting pregnant. On June 20, 1995, the couple adopted a son named Matthew Jay Povich. Her son Matthew studied at the Allen- Stevenson School. Later he attended the Riverdale Country School.