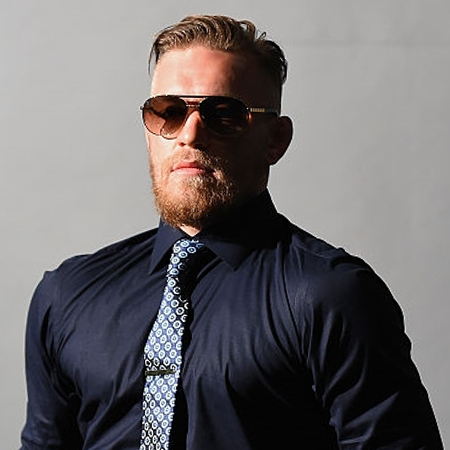 Ultimate Fighting and Cage Warriors Fighting Champion, Conor McGregor is one of the renowned names of the current time. He is an Irish professional mixed martial artist and boxer. Similarly, he is the only fighter to be champion in two UFC divisions concurrently.

Conor McGregor has been dating his beautiful girlfriend for more than eight years now. Besides, the couple recently had a baby.

Conor Anthony McGregor was born on July 14, 1988, in Crumlin, Ireland, to Tony McGregor, and Margaret McGregor. He grew up along with his two sisters Erin and Aoife.

The multiple title-winning fighter, McGregor attended the Gaelscoil and Gaelcholaiste both primary and secondary level where he played football for the Lourdes Celtic Football Club. After playing football for few years, he then began boxing at Crumlin Boxing Club. McGregor whole life changed after meeting Tom Egan with whom he started training Mixed Martial Arts.

The handsome and talented fighter made his MMA debut at the age of 18 in a fight against Ciaran Campbell in Dublin. He won the round by Technical Knockout.  Following the fight, he was signed by the Irish Cage of Truth promotion. And right after that, he started training at the Straight Blast Gym under John Kavanagh in Dublin.

By 2011, McGregor made 14 fight winning streak where out of twelve, nine were won by first-round knockout. Besides, he also recorded fastest knockouts in the history of MMA after defeating his opponent in four seconds at the Immortal Fighting Championship. Not only that, he won the Featherweight and CWFC Lightweight titles, being the first European to have held in two division titles at the same time.

A year later after his successful win, Conor signed a contract with Ultimate Fighting Championship. His UFC debut came to highlight right after his win against Marcus Brimage through technical knockout. Till date, he has fought several matches but among them match against Stephen Bailey, Marcus Brimage, Jose Aldo and so on was the fastest knockouts matches of Conor McGregor’s Career.

Whereas some of his main events are against Nate Diaz, Dennis Siver. Besides, more recently he fought against five-division boxing champion Floyd Mayweather.

Unfortunately, he lost the match but he gained a huge exposure. Moreover, he was listed in the Forbes’ Highest- Paid Athletes.  Currently, McGregor has challenged for a rematch with Floyd Mayweather.

The twenty-nine years old fighter is currently in the relationship with Dee Devlin with whom he has a baby son, Conor Jack McGregor. He has been in a relationship with his girlfriend since 2008. It’s been like 10 years the couple has been living together but till date, they have not decided to take their relationship to the next level i.e marriage.

Conor is currently focused on his UFC career this might be the reason behind Conor not getting married. He must be waiting for right time and might reveal soon.

Father of a son, Conor earns a tremendous amount of money from his fighting career. Besides that, he has been in the hearts of thousands of people. As of 2018, his net worth is estimated at around $108 million. Analysing his cars, he owns several of it including, Lamborghini, Roll-Royce which current price in the market is more than $2 million.