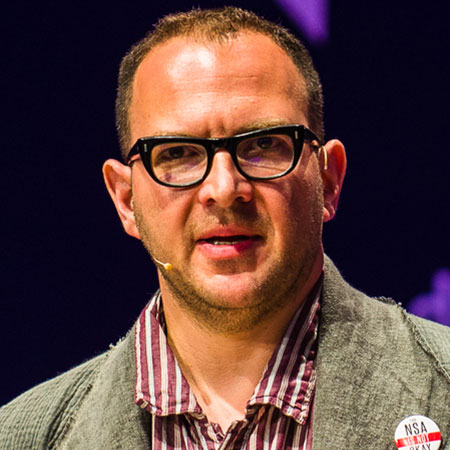 Cory Doctorow is a Canadian journalist, blogger, and science Fiction author. He is the co-editor of the blog Boing Boing. He is an advocate of the Creative Commons organization. He is mainly known for his activism of legalizing copyright laws.

Cory was born on July 17, 1971, in Toronto, Ontario, Canada. Her birth name is Cory Efram Doctorow. His father is a refugee who was born in Azerbaijan. When he was in his elementary school, he got close to Tim Wu. He studied at the SEED School and earned his high school diploma. He also attended other four universities but did not receive a degree. He served the Grindstone Island Co-Operative located in Big Rideau Lake in Ontario as their board of directors. With John Henson and Grad Conn, he co-founded the free software company Opencola in June 1999.

During the summer of 2003, they sold the company to Open Text Corporation of Waterloo, Ontario. He then worked for the Electronic Frontier Foundation as European Affairs Coordinator for four years. While working there he helped to establish the Open Rights Group. In January 2006, he left EFF to pursue writing full-time. He was named a Fellow of the Electronic Frontier Foundation. The USC Center on Public Diplomacy named him 2006-2007 Canadian Fulbright Chair for Public Diplomacy. He got the opportunity of one year writing and teaching residency at the University of Southern California in Los Angeles, US. The University of Waterloo made him the first Independent Studies Scholar in Virtual Residence in 2009.

He also works as the Visiting Senior Lecturer at the Open University. The Open University awarded him with an honorary doctorate in 2012. In 1999, he served the Science Fiction and Fantasy Writers of America as Canadian Regional Director.

When he was 17 years old, he began selling fiction. In January 2003, he published his first novel, Down, and Out in the Magic Kingdom. His first novel was released under the Creative Commons licenses. His novel won Nebula Award nomination and in 2004 he won the Locus Award for Best First Novel. In August 2003 his short story, Turncoat was published on Salon.com. in 2004 he published a short story collection A Place So Foreign and Eight More. It was awarded Sunburst Award.

In October 2008, he got married to Alice Taylor. The couple together is blessed with a daughter named Poesy Emmeline Fibonacci Nautilus Taylor Doctorow. On August 12, 2011, he got his British citizenship.