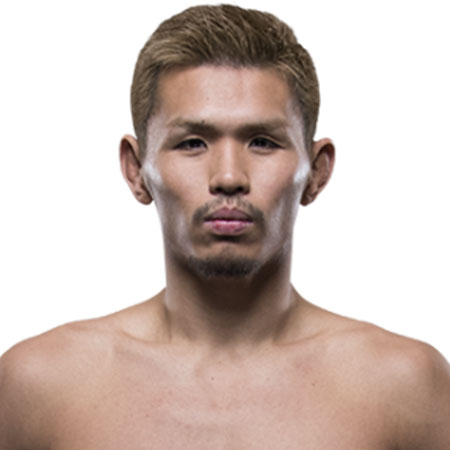 Diachi Abe Ojhi is a Japanese mixed martial artist who currently competes in the Welterweight division of Ultimate Fighting Championship. He started his professional career in 2016. Abe has a professional record of 6 wins and 1 loss. He was Pancrase Welterweight Champion as well.

Abe is a married man. He is in a committed relationship. To know more about the fighter’s life, early life, education, family, marriage, children, pregnant, nationality, ethnicity, relationship, net worth; keep scrolling.

A native of Niigata Prefecture, Japan, Diachi Abe was born on November 27, 1991. The details about his parents are not disclosed. He is of Japanese nationality. Regarding his ethnic background, he is an Asian.

Abe began training in Judo since the 2nd grade of preliminary school. He went on to become the Judo National High School Champion in 2009. During his highschool, Daichi joined kickboxing and was always interested in MMA. So, he chose that career path despite being offered scholarships from several universities to extend his Judo.

Before turning into a pro, Abe was the J-NETWORK Kickboxing Light-heavyweight Champion. His debut professional fight was against Ryosuke Igarashi in Pancrase 227 on April 26, 2016. He won the bout via a KO within 24 seconds of the first round.

After that, Abe fought against Yuta Nakaruma and Kenta Takagi in the Pancrase. He was victorious against both of them. He was then pitted against Bryson Kamaka in Mid -Pacific Championships. The fighter went on to win the bout.

Eventually, the fighter won the title of Pancrase Welterweight Champion after winning against Hiromitsu Miura on July 2, 2017. Abe then signed a contract with UFC. His debut UFC bout was against Hyun Gyu Lim on September 9, 2017. He won the fight via unanimous decision.

Furthermore, Abe fought Luke Jumeau in UFC 221 which ended up becoming his first loss in his professional career. Until then, the fighter was enjoying six winning streaks. Now, Abe is set to fight against Jingliang Li on July 23, 2018.

Abe is a married man. The details about his wife are currently unknown. However, he has posted a picture of his wife while she was pregnant. You can check it out below. It is not known when the two tied the knot but perhaps the date was around 2016.

The fighter also has a son. His son was born in May 2016. Abe is close with his family. He loves his son a lot and spends time with him. He is enjoying his fatherhood.

Abe is a family man. He is relatively private about his personal life. He does not mention his wife a lot. However, they are still together. He is just not too keen on sharing a lot about her.

Abe is a successful MMA fighter. He has won six games till now. The fighter is also signed to UFC which will provide him with more opportunities in the future. His successful career has helped him earn a great deal of money, name, and fame. The exact figures of Abe’s net worth and salary is unknown at the moment. Aside, he is also sponsored by Haleo Protein.

The fighter lives a comfortable lifestyle with his family. We can expect to see more from the fighter in coming days.