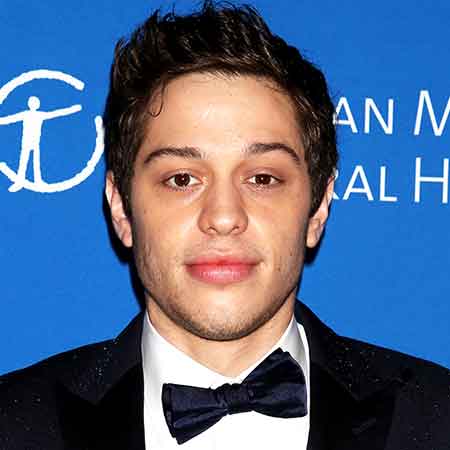 An American actor, as well as comedian, Pete Davidson, is one of the main cast of the television show Saturday Night Live. Likewise, he has further performed in comedies including Adam Devine‘s House Party, Jimmy Kimmel Live! etc.

Pete Davidson was born on 16th November 1993, in  Staten Island, New York City, New York, United States. He is the son of Scott Davidson, a New York City firefighter who died in service during the September 11 attacks and Amy Davidson. Davidson grew up along with his younger sister, Casey. Davidson.

At the age of 16, Pete Davidson tried his first stand-up comedy along with his friends. Later in 2013, Davidson made his first onscreen appearance in MTV comedy series, Failosophy. The same year, he further appeared in the series Guy Code and also in movie TubbyMan.

Furthermore, Davidson guest starred in the series including  Brooklyn Nine-Nine and further made standup appearance on Jimmy Kimmel Live!, Comedy Underground with Dave Attell and Adam DeVine’s House Party. Moreover, Davidson was a roaster on the Comedy Central Roast of Justin Bieber in 2015 and that of Rob Lowe in 2016.

In the same way, Davidson starred in the movie Trainwreck along with John Cena, Ezra Miller, Matthew Broderick and others. Furthermore, his two movies Going Places and Set It Up are in post-production. Since 2014, Davidson is still appearing in the television show Saturday Night Live.

The 24 years old Pete Davidson previously dated an American stand-up comedian, Carly Aquilino. But soon the couple separated. After that, Davidson was romantically linked with an actress Cazzie David. The duo began dating back in April 2016.

However, the things didn’t go well in between the couple and they finally separated after two years of together in May 2018. Even two breakups didn’t stop Davidson from falling for a new girl. Well, he is currently in a relationship with an American singer, Ariana Grande.

Before this, Grande was in a relationship with Mac Miller. Davidson and Grande began dating recently in May 2018 and are happy with each other.

Allocating information from several sources as of 2018 it is found out that Davidson has an estimated net worth of 0.5 million.