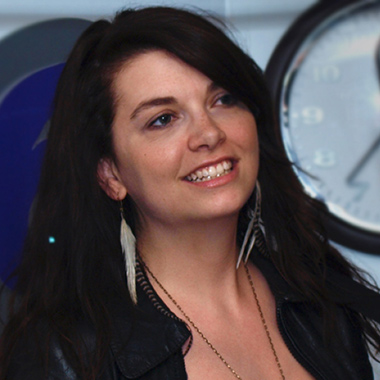 Damhnait Doyle is a beautiful and gorgeous Canadian pop singer. Her first name is Irish and is also the title of her 2003 album. Her recent album is a collection of covers titled “Lights Down Low”. From 2003-2009, she was a member of Atlantic Canadian band Shaye with Tara MacLean and Kim Stockwood. She also has formed a new band, The Heartbroken along with Peter Fusco, Blake Manning, and Stuart Cameron.

Damhnait was born on December 9, 1975, in Labrador City, Newfoundland, and Labrador, Canada. When she was in her childhood days she took guitar, singing as well as clarinet lessons.

In 1996 she released her debut album Shadows Wake Me. Her lead single was “A List of Things”. The album collected a Juno Award nomination as well as other several East Coast Music Award nominations. Along with Steve Earle, she toured Canada to support his album I Feel Alright. She then released her album “Hyperdramatic” in 2000. The album included the single “Tattooed”. Rob Heydon’s “Never Too Late” won the nomination for Video of the Year. Doyle won ECMA for four times in 2001. She has also won Video of the Year as well as Female Artist of the Year award. She released her third album Davnet in 2003. Gordie Sampson produced and co-wrote the CD. It was written at his Cape Breton recording studio, Lakewind Sound Studios. Doyle and Sampson wrote the first single Another California Song. Shaye bandmates Tara MacLean and Kim Stockwood were featured in the video. A video for Traffic was released as well. In the same year’s Christmas, she went to Kabul, Afghanistan on the Christmas special rick Mercer’s Christmas in Kabul to sing for the Canadian troops there.

She also has worked with Alexz Johnson and co-wrote two songs on Songs from Instant Star. She then co-wrote four songs on Songs from Instant star Two. She also has recorded two songs on songs from Instant Star 3: “Just Beginning” and “Darkness Round The Sun”. The song “Say What You Will” was featured in the episode of Degrassi: The Next Generation “The Bitterest Pill”. She along with Rex Goudie did a duet and co-wrote on the song “Like I Was Dying” on his album Look closer. She did her voice job in the title sequence of Degrassi: TNG in 2008. She formed a band with Peter Fusco, Blake Manning, and Stuart Cameron in 2009 called The heartbroken. In June 2010 they released their debut album Tonight Tonight.  She also wrote a song for a play her father Clar Doyle wrote for EDFNL “Are you Watching Me Now?”.

Her pictures can be easily found on the internet. She is very pretty and attractive. She is also active in using her social networking Media. She also has her own official site. Her net worth is unknown.