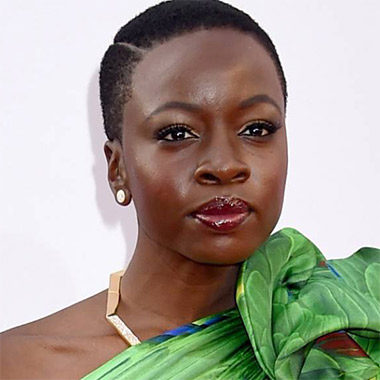 Danai Gurira is an American actress as well as a playwright. She is mainly known for playing on the television horror drama series, The Walking Dead as Michonne.

Danai was born on February 14, 1978, in Grinnell, Iowa, United States. Her full name is Danai Jekesai Gurira. She was born to a university librarian, Josephine Gurira, and a chemistry professor at the University of Wisconsin-Platteville, Roger Gurira. In 1960, her parents came to the United States from Africa. Her elder sister name are Shingai and Choni. She also has a brother named Tare who as a profession is a chiropractor. After Harare, Zimbabwe gained independence he with her family moved to the country. She was only five years old then.

She attended Macalester College when she returned to the United States. She graduated with a Bachelor of Arts in psychology from there. She also attended New York University’s Tisch School of the Arts and earned a Master of Fine Arts degree from there.

According to her, Danai Gurira began writing plays as she felt a need for “something to perform that actually kind of speaks to my strengths and speaks to women I know of and stories I think are important to tell”. She co-wrote and co-starred the play In the Continuum. She was awarded Obie Award, Outer Critics Circle Award and a Helen Hayes Award. The play, In the Continuum, celebrated World AIDS Day in December 2011. She then debuted in the play Joe Turner’s Come and Gone in 2009. In 2012 she was awarded Whiting Writer’s Award. She then wrote a play, Familiar which was directed by Rebecca Taichman. It opened at Yale Repertory Theatre in January 2015. In 2007, she starred the film The visitor. She was awarded Method Fest Independent Film Festival Award for the role. She also appeared in My Soul to Take, Ghost Town, Restless City and 3 Backyards. She also appeared in the television shows Life on Mars, Law & Order: Criminal Intent and Law & Order.  She then appeared in the drama series Treme from 2010 to 2011.

Danai Gurira played the leading role in Andrew Dosunmu’s film Mother of George in 2013. At the 2013 Guys Choice Awards, she was awarded Jean-Claude Gahd Dam award in June 2013. In March 2012 she was announced to cast in the horror-drama series The Waling Dead. She in the series plays as Michonne. For the show, she learned to ride a horse which she enjoyed doing.

Danai Gurira, who follows Christian religion is able to speak English, Shona, French and basic Xhosa. She is also the co-founder of an organization Almasi in 2011. She loves to listen to Justin Timberlake and Tasha Cobbs. She is very fit as she weighs 54 kg. She has a black hair and black eyes. She belongs to the black ethnic background.

She has taught acting and playwriting in Liberia, Zimbabwe, and South Africa. She regularly spends time in New York City and maintains an active lifestyle to keep physically fit. Currently, Gurira resides in Los Angeles. As of 2016, her net worth is estimated to be $500, 000 dollars and to be precise her yearly salary is $58,824.