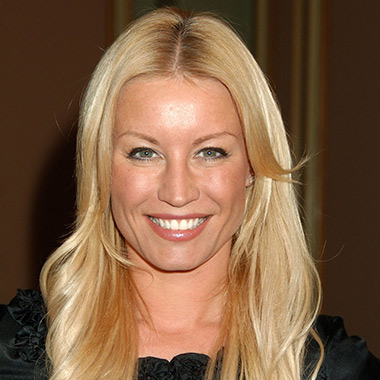 The alluring, vigorous and talented, Denise became a commonly recognized name in Britain, for presenting high profile shows such as The Big Breakfast, BBC’s Any Dream Will Do, I’d Do Anything and ITV’s Who Dares Sings! She is also famous for acting in various films and stages. Investigating every possibility, Denise’s ability to present shows, highlight movies, and radio has entrenched  her as one of the UK’s most regarded female performers.

EARLY LIFE & START OF HER CAREER

English actress, singer, dancer, and presenter, Denise van Outen was born on 27 May  1974, in Basildon, Essex, England. Her parents are Ted and Kathleen Outen. She is the youngest child and has two siblings, brother Terry and a sister named Jackie. Raised into a Catholic family, she developed a keen interest in acting and modeling at a very young age. She started modeling for knitting patterns at the age of seven. She is British by nationality and belongs to white ethnicity.
Denise’s intentions of acting had led her to attend Sylvia Young Theatre School.At the age of 12, she played Eponine in Anthony Newley’s play  ‘Les Miserables’ in 1986.  During her teenage years, she played on dramas like Kappatoo and The Bill. She did backing vocals for the band ‘Dreadzone’ with Melanie Blatt. She appeared as Jil alongside Julie Walters and Neil Morrissey on Jack and the Beanstalk. She joined  ‘The Big Breakfast’ in 1996 and left in 1998.

HER CAREER CONTINUES TO CHERISH

Getting a charge out of two fruitful seasons she came back to The Big Breakfast in 2000 for a further year-long stretch trying to support the evaluations, which had followed off tailing her takeoff.  On 5 February 2009,  she co-hosted ‘Capital Breakfast’ on Capital Radio.
Denise was also seen on several episodes of ‘The Young Person’s Guide To Becoming A Rock Star’ and ‘The Bill’ in 1999. She had a minor role in the film ‘Love, Honour and Obey’ as Maureen. She also had a cameo in ‘Are You Ready For Love?’ and  guest star in ‘The Play What I Wrote.’ Denise played the lead character on ITV’s sentimental drama ‘Where the Heart Is’. In 2007, she played as Maureen in William Baker’s ‘Rent Remixed’ and as Mary in ‘Hotel Babylon’ in July 2009. In February 2015, She announced that she will be joining the cast member of EastEnders.

A MOTHER WITH A PHILANTHROPIST HEART

Denise-Van-Outen- Denise dated lead singer of Jamiroquai, Jay Kay from 1998 and got engaged but later separated in 2001. She also dated Richard Traviss from 2003 and split up in May 2005. She then dated James Lance for a couple of weeks. In November 2007 she was reportedly dating the Any Dream Will Do, Lee Mead. On 29 January 2009, she announced their engagement and married in April 2009. She gave birth to their daughter on 1 May 2010. Unfortunately, they separated and remained good friends. She is a die-hard football fan of Chelsea Football Club. She most of the time goes to Stamford Bridge to see Chelsea playing.
The beautiful diversely talented Denis is  a charitable woman for Breast Cancer Care and Great Ormond Street Hospital. Standing 5 feet 6 inches, she is also loves trekking and has climbed Mt Kilimanjaro in 2009 for Comic Relief. In addition, she took part in a trek across Great Wall of China for Royal Marsden Hospital.

MILESTONES & HER NET WORTH

In 1999 she was voted as ‘Rear of the Year’. Grazia magazine had chosen Denise as the ‘Most Desirable Bikini Body’ in 2007. As a designer, she has two collections; her first collection was released in March 2010.  In the tenth series of ‘Strictly Come Dancing’, she partnered with James Jordan. She also wrote her name in the Guinness World Record to finish 250g of jelly in 60 seconds. Denise van Outen’s prosperous career has earned her a net worth of $3 million dollars with a lucrative amount of salary.